Get Started Today!
Plans starting at only
$9.95/month
My Home » Basketball » Articles » Youth Basketball Coaching Tips: How to Break the Press

Youth Basketball Coaching Tips: How to Break the Press 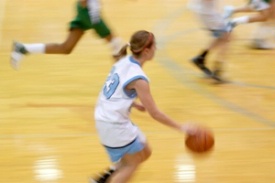 Facing a full-court or half-court press usually is disconcerting for youth basketball players. Often they are caught off guard by the press and feel vulnerable when the defense tries to force turnovers.

One of the keys to breaking a press is to teach players to beat traps, reverse the scenario and attack the defense where it is weak. Youngsters may feel like the defense is everywhere, but it’s not the case. A youth basketball coach’s job is to prepare the players and help them get comfortable against the press.

Boys’ basketball requires getting the ball past the midcourt line within 10 seconds. Some levels of girls’ basketball don’t use the 10-second backcourt violation, so players can be more patient in breaking the press.

A youth basketball team doesn’t necessarily need a dominant dribbler because it’s best to break a press by passing the ball. Still, it’s important that youngsters know how to dribble with either hand and their head up, which decreases the chance of them moving into a trap.

When offensive players spread the floor, it gives the person with the ball better passing options. Reinforce with 3-on-2 offensive philosophies.

After the opposing teams scores a basket, the player inbounding the ball will increase her passing options by moving along the baseline, which is a tactic not taught enough to youth basketball players. Any player receiving the ball wants to meet the pass – reducing the chance of a defender getting a hand on it – and simultaneously turn and square up in the Triple Threat position – which gives the player the option of a pass or a dribble.

“If you can dribble with your head up, you can read where they’re coming at you, to go the opposite direction, to split them if they’re trying to trap,” Coddens says. “So there’s nothing wrong to breaking it right there (with a dribble). But, again, the philosophy is even if you split the defense you get the ball away from them to the other end of the floor as quickly as possible.”

A sideline helps the defense trap offensive players, so it’s best to get the ball to the middle of the floor. Against a full-court pass, the offense can put a taller player at midcourt. If the offense is facing a half-court trap, it wants to put a player at the foul line or the top of the 3-point arc.

Make Breaking the Press a Key Part of Basketball Drills

Many youth basketball coaches have their teams practice press breaks by adding an extra defender – going five versus six – which will make facing five defenders in a game seem easier. Coddens suggests teams use a 2-on-8 basketball drill, in which two offensive players face a pair of defenders four different times up the court, first in the backcourt from the baseline to the foul line and then from the foul line to halfcourt, and then in the frontcourt at the same locations.

“We have two girls who are teammates, and we never put two guards together, we put a guard with a forward, a guard with a center,” Coddens says. “And then we have eight girls stationed on the floor in the four quadrants of the floor. And (the two offensive players’) job is to go against two at a time, two at a time, all the way down the floor, to be continually trapped. The girl with the ball has to handle the ball and the girl without the ball has to see where the defense is, and instead of coming to the ball, she has go to an open spot on the floor.”