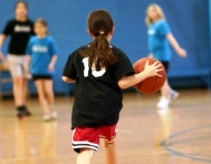 Youth basketball coaches who begin to introduce set plays to youngsters at the elementary school level can follow a simple strategy: It’s better not to have too many plays, but to get players efficient at running a small handful of them.

“The biggest thing is not to worry about the plays and only focus on the fundamentals,” says girls’ basketball coach Chris Brown, who uses a small amount of sets plays. His Tennessee Team Pride Basketball Club squad won the girls’ 9-and-under division at the 2008 AAU National Championships in Kenner, La.

“We take three weeks, four weeks (of practice) before we ever introduce any kind of set plays,” Brown adds. “So I would say get them comfortable with passing, catching, cutting. And then some things actually will start to open up. They’ll see it, and say, ‘Oh, OK, as I cut off this offensive screen, now I’m open.’ Or, ‘I see where you want me to pass the ball; that makes sense. If I pass it here and she catches it, she can score.’”

It's important for players to be instinctive and do things like attacking gaps in a zone defense. But set plays encourage spacing in the half court, using strategically planned movement to get open shots. Running set plays off inbounds passes is particularly effective, with youngsters getting open off screens or scrambling to open spots on the floor. A youth basketball coach, however, figures to have plays for different situations, like getting players open in the low post or on the perimeter. A lot of teams use a set play when it needs an important basket.

“Basic plays would be, obviously, setting screens and cutting through the screens,” Brown says. “Simpler things like pick-and-roll, give-and-go, double screens. What I think is people try to do too much (with) any kind of continuous sets. Certainly, if you’re playing with a shot clock, and you’re trying to come down and run a set and let’s say you’re down to 20 seconds (left), that’s when it becomes more difficult for teams that age to try to be successful.”

A youth basketball coach will call out most set plays, but occasionally he can let his players react off the defense. He relies on his point guard to set up the play and inform teammates.

It’s particularly important for the point guard to initiate plays off the style of defense.

“They are the table setter, they’re the one trying to create a shot for somebody else,” Brown says. “So what they need to know is (to) identify what the defense is. Is it man, is it zone, is it some kind of combination? They also need to start looking for mismatches at this point. Do we have a great advantage in the post? Certainly, at the younger level, sometimes there are people unguarded because of confusion. So somebody else can be open immediately without even running a set. Is (the point guard) open? Can she penetrate and create a shot, a dump-down or a kick-out or a layup?”

Screening is prevalent against man-to-man defense, but Brown adds, “You can attack the zone with the dribble, so you can take it to the gap. You can still set screens against zones. You can screen the middle of the zone certainly (and) you can screen the outside of the zone. If they’re cheating out, you’ve got your inside girls open. If they stay inside the screen, you’ve got your outside girls open.”

Brown points out that there is no magical set play at the youth basketball level and that good fundamentals will lead to baskets as much as set plays. It’s OK to use them, but he says to keep the plays simple and concentrate more on improving basketball skills.