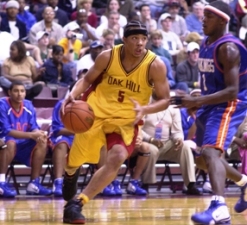 Being a lock-down defender, however, goes well beyond stopping your offensive player when he has the ball. A defender must be a stopper when he’s defending off the ball as well. He can deny his player the ball, intercept it and even force the player away from the basket and into a bad spot.

Datka and Thom, longtime high school basketball coaches, refer to off-the-ball defense as one pass away defense, when your offensive player is a legitimate passing option for the player with the ball, and two passes away defense, when the ball is on the opposite side of the court and you’re more in help mode to your four teammates. They have combined their basketball tips for the PSTV training plan Coaching Youth Basketball: Ages 8 to 11.

(Instruct the best coaching techniques through PSTV training plans. Take the next step in coaching teamwork with this great video about basketball passing.)

Man-to-man basketball defense always starts with a strong basic stance, including knees bent and feet shoulder’s width apart. When on-the-ball, the defender wants to be one arm’s length away from the basketball, with one arm high to distract a shot and one arm down to defend against dribbling.

Keeping the ball on side of the court will limits the offense’s options. Defenders need to communicate with each other, especially when one is moving into a pick and another teammate is able to switch offensive players.

Some of the same on-the-ball concepts pertain to one pass away and two passes away defense.

One Pass Away Defense

The key for a defender is to keep the basketball and his man in sight, so it might necessitate dropping ever so slightly off the offensive player. A defender must have one arm up in the direct passing lane between his man and the player with the ball.

Thom recommends using a “ball-you-man” relationship, in which the defender stays between his man and the basketball, and between the ball and his man. This form a defensive triangle.

To work on denying the ball, Thom suggests using basketball drills in which the defender slides back and forth while staying in the correct one pass away defensive form. For example, practicing the one pass away defense from the low block to the wing is a way to learn denying an offensive player popping to the perimeter for a pass.

The defender can drop a little bit from his man because a direct pass to the offensive player is dangerous and unlikely. The defender has to still see his man as well as the ball. This will enable him to cover more area, react toward a pass that comes his way and provide help to a teammate.

Datka points out that two passes away defense can be a tough concept for younger basketball players because they can forget about their man. When this happens, the defender can fail to defend a cut or deny a passing lane after the ball is passed and suddenly he is in one pass away defense.