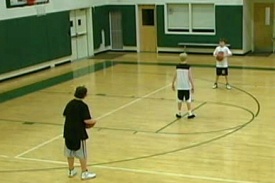 Those who wear Mentor High School basketball uniforms don’t do a lot of standing around. The Cardinals have enjoyed countless winning seasons and earned many Ohio Division I district titles with a furious full-court press and an offense predicated not only on movement to the basket, but quick passes to open teammates.

Coach Bob Krizancic believes that ball movement and shooting accuracy are two keys to offensive success. He recommends that youth basketball drills focus on offensive rebounding, quick passing and hitting open shots. He also feels that repetition is critical to success in all those areas, which is why he especially likes the “Two-Ball Drill” for teaching basketball basics to younger players.

The Two-Ball Drill features two two-player teams, each of which is provided one basketball. The team that scores the highest number of points in a 45-second or one-minute time limit is the winner.

Here is the point system:

One point: Shot made from the low block.

Two points: Shot made from the elbow.

Three points: Shot made from the corner (12 feet or longer)

Four points: 3-pointer (or shot from the foul line for younger players).

Teams cannot attempt the same shot twice in a row. Players must rebound their own shots and pass the ball to the teammate as quickly as possible, then set themselves up for their next attempt.

“One of the things I like about this drill is that it requires constant motion,” Krizancic says. “It forces the shooter to go after his rebound as quickly as possible and his teammate to set up for his next shot.”

The time limit also forces players to shoot the ball quickly, which gets them acclimated to game situations. After all, game action doesn’t allow players to take all the time they’d like before releasing the ball. This is a great basketball drill for kids and will help them as they learn how to play basketball better.