Get Started Today!
Plans starting at only
$9.95/month
My Home » Hockey » Articles » How to Play Hockey Special Teams

How to Play Hockey Special Teams 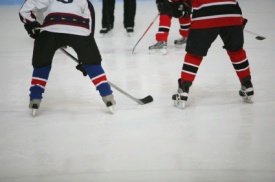 Whether on the penalty kill or power play, youth hockey players should be aggressive

Youth hockey players on the penalty kill and the power play work for opposite results, but each special teams unit can benefit from the same philosophy: play aggressively.

Doing so will maximize a team’s hockey skills, says Curt Giles, a longtime NHL defenseman (1979-93) who is the head coach at Edina (Minn.) High School. His program finished No. 1 in the 2009 ushsho.com national rankings.

“You want to put the kids in position where they have an opportunity to be successful,” says Giles, who played for the Minnesota North Stars, New York Rangers and St. Louis Blues. “On the youth level, what I would do on penalty killing is put a lot of pressure on the puck. At that level, most kids aren’t going to be able to handle the puck and move the puck quickly and cleanly."

(Passing progression drills are a great way to develop your players' puck skills and passing. It's one of the many great videos in PlaySportsTV hockey training plans.)

When on the power play, Giles adds, “Get it to the net, and everybody converges on the net. Once you start to get shots on the net, traditionally what youth (defensemen) will do is they’ll stop putting pressure because they think they’re failing – not doing what they’re supposed to be doing. If that puck starts arriving at the net, then they start to collapse to the net and then you get more room.”

On the power play, a youth hockey team needs players who can skate well and handle the puck in tight quarters, which leads to better shots. The penalty kill requires determined players who can make up extra ice and force the offense into mistakes.

On the penalty kill, Giles adds, “Same thing. If you’ve got kids who can skate, kids who have good knowledge of the game and seem to anticipate well, you can do as much as anything. It all depends on the pressure you want to put on the other team. At the youth level, traditionally kids aren’t going to be able to move the puck extremely well. Their first habit is going to come up the wall, come up the boards because they don’t like up the middle of the ice. So if you want to force everything from the middle to the outside and then put pressure on the puck carrier, it makes it really difficult.”

When trying to stave off a penalty, a youth hockey team needs its goalie to communicate with his teammates because his view of the ice allows him to anticipate the moves of the offense. His job is to be aggressive – just like everyone else on special teams.

“You should be doing all your skill development during practices anyway,” Giles says, “but if you ever want to run a mock power play or a mock penalty kill, what you can do is develop two groups. You develop one power play group to go against one penalty kill group.”