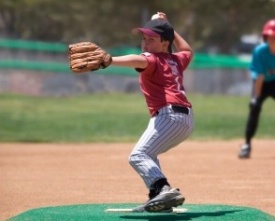 Coach effective use of the fastball, change-up and arm slot

A pitcher is often the most important player on a youth baseball team. He, as a growing youngster, also needs to be handled quite carefully.

Veteran college and high school baseball coach Rick Freeman is highly experienced with mentoring a pitching staffs at all levels, and works privately with youngsters in various youth leagues and clinics year-round.

“One has to realize youngsters of Little League age and lower are still developing,” Freeman says. “The key in teaching pitchers that age is how to throw strikes and hit spots.

“The first thing I want to make sure with any pitcher that age is they enjoy pitching. If not, there are eight other positions."

(A youth baseball coach will develop a young pitcher in stages. In this video, the Two-Point Delivery Drill will reinforce good pitching fundamentals. Learn the best coaching techniques through PSTV training plans.)

Freeman emphasizes that accuracy, not power, is often the factor that determines success of a younger pitcher. The ability to keep a hitter off-balance is paramount.

And it can involve as few as two pitches.

“A young pitcher needs to learn how to change speeds, and that is what I impress upon him to start,” Freeman says. “At that age, a pitcher can be successful with a fastball and some type of change-up. Change speeds and hit spots.”

If those two points can be mastered, confidence will grow and a pitcher will, in his mind, gain a psychological advantage over a hitter.

There is a tendency, especially at a young age, to attempt to overcome mistakes or shortcomings with speed, Freeman says. This is where youth baseball pitchers can get into bad habits and forget about throwing strikes and hitting spots.

“And bad habits are often hard to break,” he says.

Nor, according to Freeman, should a player around Little League age worry about throwing curveballs.

“With an arm and shoulder that is still growing, that’s not a good idea at all,” he says. “What I often see are youngsters looking to spin the ball right out of the glove instead of the delivery. That can lead to other problems with a young arm.

Freeman uses rather simple logic to find a pitcher’s natural arm slot, the angle from which he will throw all his pitches.

“I just watch, or play catch with, a youngster to see where his natural arm slot is,” Freeman says. “I build off that. The arm slot will only change due to an injury, and in that case it lowers. All young pitchers should throw from their natural arm slot.”