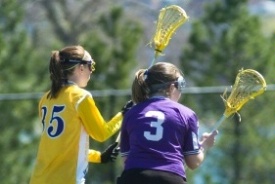 Through her lacrosse instruction, Julie Reisig tries to use a little bit of everything. The head girls’ lacrosse coach at Hightstown (N.J.) High School uses fast breaks, set plays and settled plays during a game with the purpose of scoring a goal.

“I love to do things without pressure first,” Reisig says of implementing strategies during practices. “I can't really add pressure until they get the concept.

“I usually will give them a visual on paper or a white board, then explain the concept we will be utilizing and then walk through it. Once they get it, I add pressure variables such as defenders and time constraints.”

Perhaps the simplest forms of girls’ lacrosse offense is scoring on a fast break off the draw or in transition following a turnover. This is purely instinctive when the players are running hard to goal, utilizing passing and shooting skills learned through lacrosse drills.

“If you do (take the ball hard to goal), you are likely to force someone to slide to the ball to help slow down the forward’s momentum towards the goal, thus leaving another attacker open for a pass and a shot on goal,” Reisig says.

To implement this in practice, her girls’ lacrosse team starts with a draw or a manufactured turnover or interception. Reisig prefers using a scramble.

“Another thing to do is practice from a 'scramble', where the kids don't know who is going or how many until the whistle blows,” she says. “The kids, tapped by the coach, run out on two teams. First to ball goes to goal. I love that, because it forces them to work hard to come up with the ball and communicate. I get more talking on that drill than anything.’’

Since girls’ lacrosse does not have the physical contact of boys’ lacrosse, many set and settled offensive plays start with the ball behind the net in the lacrosse stick of a feeder. The feeder’s job is to get the ball to an attacker cutting towards the goal since the goalie will be playing facing the feeder with her back to the attackers.

Stacks are just vertical lines of people, in no particular order, which cut in either a random or pre-determined pattern across the circle, hoping for a feed from behind the cage or somewhere else on the arc, from a feeder.

“It makes the defenders chase the cutter and causes confusion, because (the stackers) sometimes go all at once or in rapid succession,” Reisig says. “Defenders have to make a decision as to which girl to cover, so there is room for exploiting a mental error on the defender's part or a hesitation of any kind.” Muddles look like a blob or an amoeba. They don't give a clear indication of who will cut first. “I think they just cause more confusion for the defenders,” Reisig continues. “Girls will call a play, get in the muddle and then make either random or pre-determined cuts, hoping for a quality feed if they lose their defender.”

Stacks and muddles sometimes allow a team to switch the matchups since teams are most likely to place their best defender on the best offensive player. Reisig said lacrosse coaches have to make sure the defense communicates with each other by saying, “I’ll take first (cutter); you take the second cutter.”
Having girls practice on the fan without defense will allow players to gain a sense of where they have to go on the cuts. After understanding the concept, coaches can add defenders, which then will force the players to adjust their cuts to the movement of the defense.

This is a where lacrosse drills such as passing and catching come into play. Using those skills to pass the ball around the perimeter in a slow manner is “designed to lull the defenders into a false state of security and then take the best calculated matchup.”

An impatient defense could be forced to come out farther from the arc to contest passes or pressure the attacker. The offense can take advantage of the numbers if the attacker beats that defender.

Reisig gives an example of one her team’s set play Hightstowns.

“We had another where everyone would get on one side of the arc and run across to the other side at the same time, taking the defenders with them,” she says. “ Someone, who was a lefty, would cut back and receive a lefty pass from the feeder behind the net and shoot.”