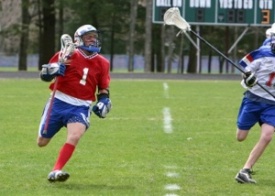 Fast break execution is one of the more important aspects of boys’ lacrosse. Communication, teamwork, vision and lacrosse stick skills are all paramount in springing transition. The offensive attack can begin with the lacrosse goalie.

“The whole clear piece is essential to being successful,” says Patrick DeBenedictis, head boys’ lacrosse coach at the New Hampton School in New Hampton, N.H., perennially one of the top programs in the New England region. “When you’re clearing, you actually have a man advantage. You assign the open guy to create the clear. They’re the quarterback looking for the open receiver. The difference is this quarterback can cross the line of scrimmage. You want to spread the attackmen and midfielders out and use some strategy to find the open player.”

Once the goalie outlets to the open player, strategies vary. Some boys’ lacrosse coaches prefer to find a defensive-minded long-stick defender to move the ball up the field, but the most common strategy is to get the ball to an offensive-minded short-stick midfielder.

If the attacking team gets the ball up the field and into the offensive zone quick enough, it can cause hesitation with the defender riding the attackmen, therefore creating separation and a gap in the defense.

“You’re like a (basketball) point guard,” says DeBenedictis, who appeared in four consecutive NCAA Division I tournaments while playing collegiately at the University of Massachusetts. “You’re going full-out looking for mistakes in the defense. In a fast-break situation, just like in basketball, there’s going to be somebody open; it’s just a matter of deception and how the defenders slide.

“You’re trying to find how they’re cutting and what will give you the best scoring opportunity. The faster you move the harder it is for the defense to react because they have less time to think. They’re thinking more on instinct rather than any type of strategy.”

Once a team exploits the defense, the first objective, according to DeBenedictis, is to get up the field and shoot the ball. The second objective is to draw a defender away from the net and find a trailer who will have an unimpeded lacrosse shot at the net.

If those two options aren’t available, the third option for a boys’ lacrosse team is to employ what is referred to as the slow break. With the slow break, the objective is to change the plane of the field.

“Often when (the defense shifts) they forget about people,” DeBenedictis says. “Like in basketball, you have trailers. You have your midfielders trailing down and in all the confusion. If they’re not picked up properly or if somebody has an advantage on their defender, they can end up with a nice scoring opportunity.”