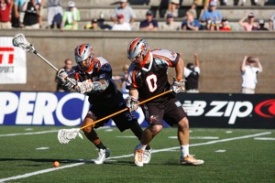 You’ve heard about not mincing words. Major League Lacrosse defenseman Dan Cocoziello refuses to mince actions. He believes it’s important to set the tone immediately when he draws his defensive assignment, especially against a top scorer.

“It’s one of things, kind of even in life, too, you know, first impressions are everything,” Cocoziello says. “If you get out there and that kid comes out and you throw a weak check and he comes around and scores, he’s going to have a lot of confidence the rest of the game. If you get the mentality that you’re going to go out there and really whack ‘em and beat ‘em up right from the start of the game, let him know that you’re ready to play and it’s going to be a long game for him, it’s going to set the tone early. You can’t set the tone in the second half. It’s not going to work that way.”

Cocoziello, who went from being a USILA first-team All-American at Princeton University to an MLL career, has frequently played the shutdown defender’s role. A 6-foot, 230-pound long stick defenseman, he uses his upper body to his advantage, a physical style he recommends for boys’ lacrosse players on up.

“A lot of times, it’s a small, quick guy or a big, physical guy. But nowadays it’s a big, quick guy,” Cocoziello says. “If you’re younger, you’re playing youth league or high school or middle school, whatever it is, there’s definitely different styles of play. … You gotta be really ready to move your feet, throw a couple checks that are going to turn them away (from the goal) and use your body. If you’re covering a bigger, more physical guy, you’ve got to be ready to play and ready to bring it. Be tough out there, be willing to hit and take a couple hits and realize it’s going to be a physical game with that player.”

Cocoziello says there are a number of key factors for learning how to play lacrosse defense.

A boys’ lacrosse defenseman wants to keep his lacrosse stick on the attackman, get in a strong defensive stance and shuffle his feet, staying between the opponent and the goal.

In addition to the body positioning, use checks to assert control, frustrate the attackman, even force turnovers. Beginner defensemen can be successful with both poke and slap checks. To perform the safer poke check, a player wants to have his bottom hand on the end of his lacrosse stick and extend the stick toward the attackman’s bottom hand in a poking motion. To perform the slap check, which must be made under control to avoid a foul, a defender will use his stick to slap the opponent’s stick, especially when the ball is in the basket.

When making checks, don’t give up body positioning.

“Footwork is the start of it,” Cocoziello says. “It doesn’t start with your stick. If you don’t have good feet, it doesn’t matter if you throw the best checks in the world, the attackman is going to run by you. A lot of these players now are young players who want to throw the big checks, or have the best stick on the team, or whatever it is, but a lot of times it’s the best athlete or it’s a guy who wants to work on his feet all the time and is going to cover that player.”

If you’re going one-on-one with an elite scorer, it might feel like you’re out on an island defensively. But, remember, you’re not. Your teammates are ready and willing to provide support. That’s why lacrosse defensemen should always communicate with each other.

“Matchups are fun,” Cocoziello says. “At the same time, a lot of it is team defense also. If a guy dodges 15, 20 times in a game, and he scores, good for him. So you’ve got to be willing to bounce back from something like that and just realize it’s a long game.”

And let the attackman know that right away. Don’t mince actions.