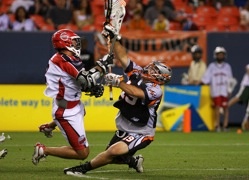 There wasn’t much of a learning curve for Denver Outlaws goalie Jesse Schwartzman during his 2008 rookie season in Major League Lacrosse. He had an 8-4 record and a .551 save percentage and led the Outlaws to the best regular-season record in the Western Conference and into the MLL Championship Game, where they lost to the Rochester Rhinos. Along the way, Schwartzman represented the Western Conference at the MLL All-Star Game.

He returned to the All-Star Game in 2009, playing for the Young Guns squad. He also led MLL with an 11.28 goals-against-average

Schwartzman enjoyed a standout career at Johns Hopkins University and helped lead the Blue Jays to NCAA Division I championships as both a sophomore in 2005 and a senior in 2007, winning the Most Outstanding Player award at each Final Four. As a three-year starter, he garnered several All-American honors and led the nation with a 6.68 goals-against-average in 2005.