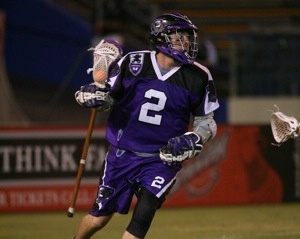 Liam Banks is just as comfortable teaching lacrosse to youth players as he is playing for Major League Lacrosse. The attackman spent his sixth MLL season in 2009 with the Chicago Machine. He began his career with the New Jersey Pride in 2005 and totaled 34 points in each of his first two seasons. He split the 2007 season between the Pride and the San Francisco Dragons, setting career highs with 26 goals and 37 points, and played a second season with the Dragons in 2008.

Banks was a standout at Syracuse University and earned the Most Outstanding Player award at the 2000 NCAA Division I championship game, when the Orangemen beat Princeton.
Banks has coached with the 2006 University of Maryland women's lacrosse team, on the club level and at Upper Dublin High School in Fort Washington, Pa.