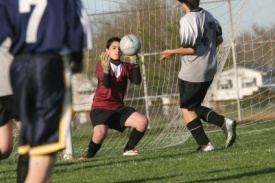 But Latham also understands the differences between coaching scholastic players and teaching young, inexperienced kids. He has coached youth soccer, which he believes requires a far more open approach.

Latham will determine the most appropriate spot on the field for a player trying out for his high school soccer team. Player preference plays no role in Latham’s considerations because winning is among his primary goals at the high school level.

However, he doesn’t recommend the same philosophy for youth soccer coaches. Latham believes younger kids should not be positioned wherever they most want to play. Rather, he recommends that all youth players should be tested at every spot on the field to best determine the most appropriate position for them.

“Historically I put players in spots where it best suits the team,” says Latham, who moved to the United States from Wales in the 1980s. “It’s not their choice, especially kids going into ninth and 10th grade. If they’re good players, they can play just about anywhere on the field.

“But at the lower levels, you want the kids to experience as many different positions as possible. That’s the best philosophy for 9-, 10- and 11-year-olds because that way they can learn all about the sport. That certainly would be my philosophy there.”

“For first-time players, touching drills are most appropriate,” he says. “You play small-field games and work on passing and receiving and crossing and shooting and heading. Those are attributes you need to work on the most at that level. Plus you teach them about traditional soccer skills like positioning and formations.

“But you do want to stress that every player gets touches on the ball. The key is that all the kids are involved at all times and not just standing around. Too often coaches do line drills and the kids don’t get to touch the ball enough.”

Latham believes a player who enjoys learning soccer skills will continue to participate and improve, and that making practice fun is tremendously important.

Latham adds that only an active approach to practice time will motivate youth soccer players to want to continue, not only on a daily basis, but also on a permanent one.

“When you’re running a practice at the youth level, you want to make sure you don’t have any down time,” he adds. “That’s especially important when you’re talking about 9- or 10- or 11-year-olds.”