My Home » Soccer » Articles » Coaching Youth Soccer: How to Manage a One-Sided Game

Coaching Youth Soccer: How to Manage a One-Sided Game 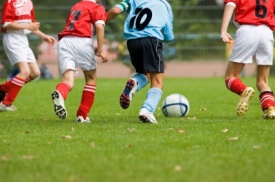 By Robin Dean
Special to PlaySportsTV

In youth soccer leagues, one of the key ingredients to good player experience is to ensure competitive games with balanced teams. However, despite efforts to create equality between teams, there are occasions when one team is much stronger than the other. This presents a problem for both teams; the weaker team has morale issues in the face of a negative goal margin, while the stronger team does not really gain from playing a one-sided game.

One of the more difficult challenges for a volunteer parent-coach is when he finds himself in this situation managing a soccer game. If you are coaching the losing team, there are a limited number of things you can do. A defensive alignment may reduce the final margin, but it will not change the reality. Keeping your strongest players on the field at the expense of the weaker players is not fair either. In the end, the only real relief will depend on the actions of the winning team's coach.

If you happen to be that soccer coach, you are not in an easy situation. In fact, many coaches will confess that being the winning coach in a one-sided game is far more awkward than being the losing coach. At least, as the winning coach, you have a chance to do something about it. But how does a coach tell his players not to score anymore, especially when that's the whole point of the game?

Fortunately, there are steps that you can take to ensure that the score remains reasonable and the other team is not humiliated. You should avoid "running up the score" and instead should seek new challenges for your own team within the context of the game. In the absence of a league-wide "mercy rule," when a game score margin reaches five goals (5-0, 6-1, 7-2, etc.), the winning team should take immediate measures to limit additional goals without embarrassing the opposing team.

If you're coaching youth soccer, try some of the following tips:

All of these measures must be introduced in a subtle way. Shouting instruction such as, "Stop scoring!" may humiliate the opposing team. Therefore, instructions should be passed quietly to your soccer players. For example, substitutes entering the field can quietly pass messages to the rest of the team.

Recognize that this is not an easy issue. It is not easy for a youth soccer player to be told "don’t shoot" or "try not to score" when that is the fundamental key to the game they are learning and playing. Therefore, effective techniques to control the game should include skill challenges for the players requiring them to complete assigned tasks prior to shooting and scoring.  These challenges should be made more difficult according to the circumstances but should always make scoring much less likely. Seeking ways to contain large goal margins also teaches players a good sporting attitude.

Finally, remember what's important. Youth soccer coaches, referees and parents are all jointly responsible to create a good experience for all of the players. When circumstances are less than ideal, work together with the coach of the other team; a few words between the coaches can go a long way to avoid misunderstandings and to resolve the situation. Afterall, it's not whether you win or lose, it's how you play the game.

Robin Dean is the executive director of the West Windsor-Plainsboro Soccer Association.