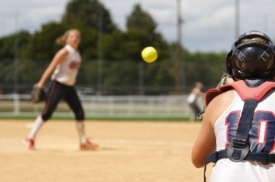 The problem is certainly not new, let alone uncommon. Young kids start out playing a game because they like it. But at some point along the line, it becomes less about just having fun and more about winning or other factors.

In more than two decades as a high school softball coach, Bob Hutchinson has seen both sides of this. He has coached junior varsity teams, where many of the players are there simply because they enjoy the experience. And he has coached varsity teams with Division I college prospects, and the pressure that comes with that.

“When kids start getting into high school, especially with travel teams and the importance they place on them now, the emphasis is more on making them marketable to college coaches,” says Hutchinson, who won a New Jersey state title as the head softball coach at Steinert High School. “At the high school level, it continues on.”

It’s a much different story with junior varsity teams. While Hutchinson might have been preparing a handful of players to move up to the varsity team, most of the players had reached their softball ceiling, and they knew it. “The kids are going out for the sake of playing,” he says.

As youth softball players are moving up through the ranks, they, their parents and coaches should keep the sport in perspective. It will keep the softball fun, and make kids want to continue playing it.

According to Hutchinson, the shift to winning is prominent with the travel teams. Since the college softball season completely overlaps high school softball season and recruiting budgets are often far smaller, Division I coaches prefer to attend the larger travel tournaments, where they can scout more players at once.

“(Travel softball) has taken high school softball out of the equation,” Hutchinson says.

As an example of this, Hutchinson mentions one of his former stars from a New Jersey state championship team, catcher Julie Meyer. She received a scholarship to Pac-10 power Cal — an incredible accomplishment for someone on the East Coast. She got noticed not at one of Steinert’s games, but at a travel softball tournament in California, where she happened to have two great days with the Cal coaches in attendance.

With the cost of college getting higher every year, looking for scholarships is no small consideration.

The odds of getting any kind of a softball athletic scholarship, let alone a full ride, are slim. It is not like NCAA revenue sports football and basketball, where most athletes are on a full scholarship.

“There might be only 10 scholarships for softball, and those have to cover 25 players,” Hutchinson says.

The result is, if a player is fortunate enough to get any kind of scholarship, it’s unlikely to cover more than a small part of the cost of going to college.

How can a softball coach try to make sure his players (and, perhaps more importantly, their parents) not get caught up in the increased stakes of high level softball? This is how Hutchinson does it:

“I always have a meeting before the season with the parents,” he says. “I go over the expectations for the team and the kids. I tell them realistically what is out there. I try to make a point to talk to all parents personally and explain what realistically is going on.”