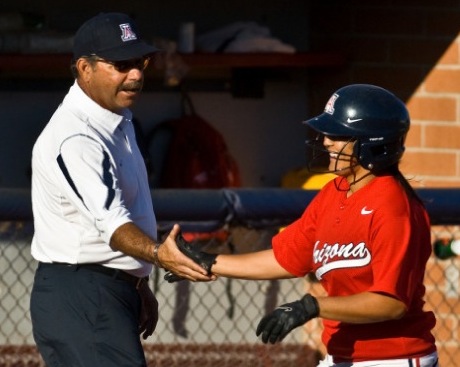 Softball may have a lot of similarities to baseball. But there is one area in which softball, or at least the level of it that Mike Candrea coaches at, is glaringly different.

Due to the quality of the pitchers and the shorter distance they have to throw to home plate, the hitters are at more of a disadvantage than they are in baseball. Softball games are often lower-scoring, which makes teaching baserunning, and using it to manufacture runs, incredibly important.

If anything, over more than two decades with both the University of Arizona and the U.S. National Team, Candrea has seen baserunning become more important.

“The big thing is to try to be aggressive, but smart,” says Candrea, winner of eight NCAA softball championships and the 2004 Olympic gold medal. “If you look at any good team, you’ll see that baserunning is the foundation to success. It’s very hard to play softball base to base.

“It’s a part of the game that anyone can be good at. We take pride in being aggressive, and it shows.”

Candrea believes a softball player can’t wait to think about what to do on the bases until you get to first base. It has to start at home plate.

Do you try to take an extra base on a bloop base hit into the shallow outfield? Do you go for second base if the outfielder tries to throw home or to third base to get the lead runner? Those are just two of the potential questions that must be answered.

“You see a lot of teams that get a base hit and only think about getting to first base,” Candrea says. “We try to be aggressive out of the box.”

When Candrea and his coaching staff prepare scouting reports, one of the things they look at is the opposing catcher. A catcher with a strong, accurate arm may make opposing softball players more reluctant to try to steal bases. In such cases, Candrea says you should put players in your lineup who can bunt.

Candrea, his assistants and his players also watch the catcher throw between innings to get a read on her capabilities.

Softball rules prohibit runners from leaving their base before the ball is released. But that doesn’t mean coaches, including Candrea, don’t try to get away with it.

“Truthfully, I don’t want to wait,” he says. “If we make a mistake, I would rather be called out for leaving early than tagged out.”

Good baserunning is more than just stealing bases or going from first to third on a single or moving a runner from second to third (or home) on a ground ball to the right side of the infield. Opportunities to take an extra base, and manufacture a run, can arise unexpectedly, and you must pay attention and be ready to go on it.

This frequently happens, Candrea says, on base hits. And these may present a chance to get a runner into scoring position.

Candrea says he spends about half of each day’s practice working on baserunning. Some of this is done through batting practice, in the context of situational hitting. But a lot is done as part of defensive drills.

The most important thing, he says, is making sure his players know how to make good decisions on the bases, and every other aspect of the game, in every situation they encounter.

“I tell the kids that, during practices, we’re developing a deck of cards,” Candrea says. “That deck of cards is your softball database. The great players have a big database and are able to shuffle the right card to the top.”

Candrea and his softball teams have been among the best at shuffling that winning card to the top of the deck. And a big reason why is their ability to take bases, and games, through their baserunning.