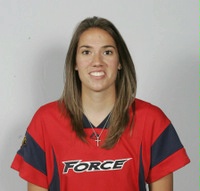 Margo Pruis is a versatile right-handed pitcher with the Philadelphia Force of National Pro Fastpitch. The 6-foot-1 standout is used as both a starter and a reliever. She joined the Force in 2007 after a stellar career at Wichita State, and won five games in each of her first two professional seasons. Her first pro win came against Team China on June 13, 2007.

At Wichita State, Pruis made the All-Missouri Valley Conference first team as a senior in 2007 and set career records in several categories, including strikeouts (853, third all-time in the MVC), wins (77, second all-time in the MVC), shutouts (26), no-hitters (five, with one perfect game) and lowest opponent batting average (1.72).