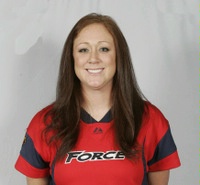 The 2009 season was pitcher Jessica Sallinger’s fourth in National Pro Fastpitch, and first with the Philadelphia Force. Previously, the right-hander pitched for the Chicago Bandits. Her best season with the Bandits came in 2007, when she posted a 9-6 record with a 1.34 ERA.

While playing collegiately in her home state at Georgia Tech, she was the Atlantic Coast Conference Pitcher of the Year from 2003 to 2005. She graduated as the ACC’s all-time leader in strikeouts (1,398) and wins (109). She was a third-team All-American in 2004 and 2005.