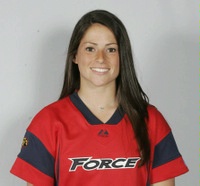 Sam Yodowitz made her National Pro Fastpitch debut in 2009 as a pitcher with the Philadelphia Force. A left-hander who is accustomed to shouldering a big workload, she got right into coaching as an assistant at her alma mater, C.W. Post, before joining the Force.

Yodowitz was the first softball player from C.W. Post and the East Coast Conference to be signed to a professional contract.  A two-time NFCA Division II All-American, the 2008 ECC Player of the Year posted a 90-27 record and 1.68 ERA during her career. She struck out 586 batters in 792 innings. As a senior in 2008, she started all seven of C.W. Post’s postseason games, including in the NCAA Division II Tournament.