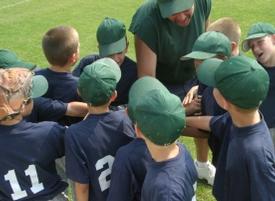 Many youth baseball players have watched the sport or been around it before they play for an organized team, but coaches are responsible for making sure the youngsters understand baseball rules. They should not assume the players know any of the rules at an early age.

A coach doesn’t want to overload players with baseball rules while they also learn baseball skills.

(Continue to get your youth baseball players started on the sport by helping them to select the right bat. Learn the best coaching techniques through PSTV training plans.)

Here are 10 important rules to make sure beginners learn during your team’s season:

Batting order. Make it simple for the kids and keep your youth baseball team’s batting order posted in the dugout, so they can follow it. If the umpire is aware that a hitter bats out of order, he can declare him out.

Keep the helmet on. A player can't remove his helmet while at bat or running the bases. A first offense draws a warning from the umpire. A second violation results in the player being called out.

Strike zone. It takes a steady eye for a batter to cover the entire strike zone. Although it is subjective from umpire to umpire, the strike zone is considered the space over home plate between the batter’s shoulders and the top of his knees (when the batter uses a natural stance).

Fair ball! A batted baseball is fair if it lands in the field of play or if it touches or passes first or third base within fair territory (even if it then goes over the foul line). The point to make to batters is to run hard to first base whenever they hit the baseball.

Tie goes to the runner. It’s as simple as it sounds. An umpire judges whether a baserunner is safe or out. If the runner can be forced out at a base and he arrives there at the same instance the fielder catches the ball, the runner is considered safe.

Baserunning. Running the bases is one of the most fun parts of youth baseball, but, yes, there are plenty of rules for it. A runner must touch each base when going around the infield and won’t score a run until he touches first, second and third base and then home plate in succession (if he misses one he has to go back to that base while touching them in succession and not passing any other runners). A baserunner can’t pass a fellow runner in front of him when rounding the bases. He also can’t run more than three feet away from his baseline to avoid being tagged out unless he is trying to avoid interference with a fielder. Make sure the runners know how to slide properly, safely and within the rules.

Make the right pitch. A pitcher has to keep one foot on the rubber during his windup and must come to a complete stop – though brief – during it. It’s also important to stress that a pitcher can’t put either hand to his mouth within the pitching circle unless the umpire has allowed it beforehand (perhaps on a cold day).

Sportsmanship. Major league players can’t argue balls and strikes. Stress that your players show respect to the umpires as well as coaches and players. Umpires make the decisions and can disqualify a player or coach for good reason. It’s a life skill that outweighs all your baseball drills and skills.