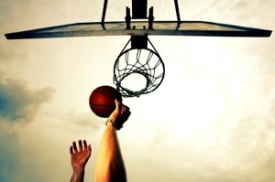 “I know some coaches who don’t do any rebounding drills and expect their guys to rebound,” he says. “Well, unless they have a lot of heart and play hard, they’re not going to do a lot of that.”

Smith, who has coached Oak Hill Academy, from Mouth of Wilson, Va., to eight mythical national high school titles, makes rebounding an integral part of his practices. In fact, the 2009 Naismith National High School Boys Basketball Coach of the Year, hands out offensive and defensive rebounding awards at the end of each season.

Rebounding is not overally technical, unlike shooting or dribbling, but it’s vital to a team’s success. Smith recommends youth basketball coaches stress this point to youngsters. Get started with a form rebounding drill.

“If you don’t emphasize it, then you’re going to catch guys standing around in games and not rebounding like you want them to,” Smith says. “What I tell my guys is you have to anticipate every shot that’s going to be missed. A lot of rebounding is effort and desire. Balls aren’t necessarily rebounded by guys who are the tallest. It’s usually the guys that are the most active, the guys that want to rebound.”

To be an effective rebounder, a player must keep his eyes on the ball to know when a shot goes into the air. On the defensive end, the player has to be cognizant of both the ball and his opponent. All players have to anticipate where the ball might come off the rim or the backboard. If the shot is taken from one side of the court, it often comes down on the other side.

It’s most important for a defensive player to box out an opponent and be in position for a rebound. He can use his hands as a guide – without grabbing or fouling the opponent. He wants to create space with his arms, shoulders and buttocks, and catch the basketball at its highest point, usually with two hands.

Conversely, offensive rebounding is about even more hustle and determination because this player has to get around defenders to get to the basketball.

“You can go 10 straight times in a game and maybe never get it,” Smith says, “if it doesn’t fall right, if it doesn’t come off the rim right, a guy boxes you out. But you have to go almost every single time to be a good offensive rebounder.

“You get guys who want to do it. You get guys who maybe don’t get as many touches – maybe they’re not as skilled as other players  – and you can tell those guys individually, ‘Hey, you want to score. Here’s a way you can score.’”

The simplest rebounding drills pay off. A player can just practice catching the ball off the backboard and turning away from the rim for an outlet pass.

Smith’s favorite drill is an offensive-defensive team rebounding drill, which he finds motivates players. He believes a 3-on-3 situation is ideal for maximizing the spacing and teaching, although other combinations are fine.

To run the basketball drill, put three coaches on the perimeter – one on each wing and one at the top of the circle. The offensive players begin each sequence outside the foul lane and the defensive players start inside it. The coaches (players not in the drill can be substituted) pass the ball around the perimeter until one shoots it. It becomes a live rebounding drill.

A defender must rebound the basketball and make an outlet pass to one of the coaches on the perimeter to gain one point. An offensive rebound is worth two points, and that player can put up a shot for another point, gaining yet another point with a successful basket. Run the drill until the offense or defense gains eight points.

“If you box out and you do it properly, you may go five straight rebounds by the defense,” Smith says. “But it only takes a couple rebounds by the offense and a put-back to win the drill.”

In order words, don't leave rebounding out of your basketball practices.