Get Started Today!
Plans starting at only
$9.95/month
My Home » Basketball » Articles » Youth Basketball Tip: Give Yourself an Extra Hand

Youth Basketball Tip: Give Yourself an Extra Hand 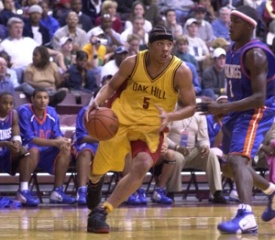 There is a centuries-tested notion that the more skills you carry into a basketball game, the better your chances are for success. Dribbling and shooting a basketball are no different.

While many youth basketball players spend countless hours honing their skills with their natural hand, they ignore one of the easier ways to improve on the court: strengthening their weak (or opposite) hand.

Steve Smith, the national championship-winning head coach of the Oak Hill Academy boys’ basketball team in Mouth of Wilson, Va., emphasizes the need for a basketball player to develop ambidextrous skills, and the results have been telling. Under Smith’s tutelage, Oak Hill has won eight mythical national high school championships.

One of the many keys to his success? Year-round emphasis on opposite-hand skills. In dribble tag, players will need to utilize both hands.

“You need to develop skills with both hands,” Smith says. “You certainly have to be able to dribble with both hands. In scouting reports we recognize when a player only dribbles with their right or only with their left (hand). You pick that up on players. You don’t want to be that player because you’ll be limited (in your effectiveness)."

A player can use many basketball drills to improve shooting and dribbling. He can simply practice shooting with one hand (without the support of the second), developing the coordination from the pushing stage (beginner) to the natural free-flowing shot of a veteran. He can drill off the dribble or from the stationary position. Off the court, some even turn to handwriting with the opposite hand in the classroom.

Regardless of your choice of methods, Smith emphasizes frequency and consistency.

“Work on it every day, especially in the offseason,’’ he says. “That’s when it’s better (to learn) in the offseason. Coaches do their best during the season, not slighting the fundamentals. But you need to work all summer and spring, working on ball handling."

Smith has used Michael Jordan’s simple routine as his model. “Michael Jordan would take one skill all summer and work on it,” Smith says.

According to Smith, physical conditioning (not just fine-motor work) is equally important when strengthening the opposite hand.

“We incorporate all types of conditioning drills with the ball. Sometimes we incorporate layup drills where we make them do left (layups) as well as right. Remember that the majority of players are right-handed, so we use the offhand to do all types of things.”

What’s difficult for a coach is getting the player to stick to the routine in the offseason, not the drill itself.

“If a kid’s on his (or her) own, you’ll refresh their memory, but if you’re working him out it should be his routine. They should be reinforced daily.

The earlier youth basketball players start working on the opposite hand, the more it will pay off over time.