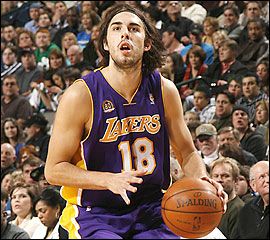 Sasha Vujacic has played professional basketball since he was 16 and has played guard for the NBA's Los Angeles Lakers since the 2004-05 season.

A coach's son, the 6'7" native of Slovenia has earned the nickname "The Machine" because of his ability to sink several 3-pointers in a row. He usually plays shooting guard within the Lakers' triangle offense.

Vujacic averaged 8.8 points over 72 games on the Lakers' squad that reached the 2008 NBA Finals. He was rewarded that summer with a three-year, $15 million contract.

Vujacic, who was engaged to tennis star Maria Sharapova in 2010, was traded to the New Jersey Nets durng the 2010-11 season.