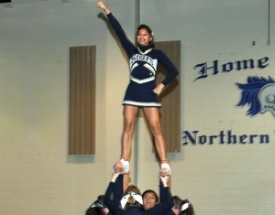 By Craig Haley
PlaySportsTV Managing Editor
As a former gymnastics coach, Lance Wagers, the president of the American Cheerleaders Association in Dallas, remembers vividly how some of his gymnasts would be confident with different moves while they had a spotter. As soon as the spotter moved away, the gymnast would fall to pieces emotionally.
Cheerleading can be similar, and when youngsters are learning different lifts and aerial moves, safety is most important. That’s why Wagers stresses not to give cheerleaders difficult stunts until they are ready for them. Spotters help give the cheerleaders confidence, so while they are learnng such moves, provide the necessary spotters.
“The important thing would be whoever is coaching them would teach them in progression,” Wagers says. “The mistake that I’ve seen in the industry in the past is that people take a young girl and try to get her to the most difficult stunts first. Just like in gymnastics, they have to learn a forward roll and a cartwheel and a roundoff before they can start doing a backhand spring. The same thing applies to safety and building in cheerleading that they start with the elementary and move up because the same principles apply – they have to learn their body control and that sort of thing.”
Jumps and aerial moves add explosive elements to cheer routines, but they have to be timely precisely. The lifts of the spotters change according to the different aerial moves.
Young cheerleaders first learn beginner jumps such as the Toe Touch, Pike and Herkie before advancing to other aerial moves like the Backhand Spring. Eventually, advanced cheerleaders will get to moves like the Kick Double or Basket Toss. Some will never get to that level, however. It all depends on the individual’s skills and the type of instruction they are receiving, Wagers says.
Regardless of the level, “Definitely do them with a qualified spotter because a little bit of lift really helps them get the confidence,” Wagers says.