My Home » Football » Articles » Coaching Football: Linemen Need to be Students of the Game

Coaching Football: Linemen Need to be Students of the Game 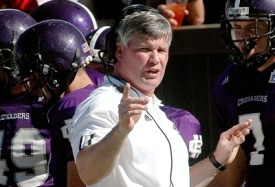 Naturally, you think of a big, hulking athlete, and rightfully so.

More than ever, though, linemen have to be students of the game. Football teams are running more complex schemes, even on the youth football level, so a coach should want his linemen to be as smart as they are big. A team needs its linemen to be in the right position, using strong technique and making the right mental adjustments to be successful.

Thus, youth football coaches must make it a point to teach linemen about the mental aspects of their position.

An offensive lineman can use many techniques, but a football coach first needs him to understand the play itself, according to Holy Cross University head football coach Tom Gilmore.

“One of the things when we (coaches) talk to linemen,” he says, “the first question is, if it’s a running play, for example, we ask, ‘Hey, what’s the steps of the running back? What’s his aiming point? Is it what we call a fast-entry play or a slow-entry play? How tight or how wide is it hitting?’ Things like that. It starts with understanding the play and then understanding the technique that allows you to make the blocks within that scheme. Often we watch high school players and it’s almost funny (with) the concepts of the proper angle of departure and things like that, which you would think are almost common sense, but it’s really not. You really have to teach them the scheme and your exact point on the hole and how you’re trying to hit it and so on.”

Like run blocking, the mental part of pass blocking also is an important football skill. An offensive linemen has to understand different drop step techniques based on the play, whether the quarterback has a three-step drop or five-step drop, is rolling out, semi-rolling out, or designed to do something else. The play call impacts the lineman’s footwork, leverage and timing of their block.

“We do an awful lot of footwork drills,” Gilmore says. “Probably 80 percent of our practice with offensive linemen is technique-type stuff. They spend an awful lot on air, then on bags, then on live people, just working different techniques.”

Defensive linemen also should be taught the mental aspects of their position. During football drills, a coach can teach them how to read their opposing lineman's moves and mirror them, then be able to shed blocks.

“The defensive line is a little bit different,” Gilmore says. “Obviously, defensive players are reaction players. You don’t know where the play is, like an offensive player knows. You have to be able to read and react. We break down takeoff, reacting to the snap or the movement of the offensive player … and then reacting to the blocker to maintain the proper leverage to your gap. I’ll be honest with you, that is the biggest part of the whole thing. And then, like an offensive linemen, you have to teach them what to do, you have to get them in position with leverage.”