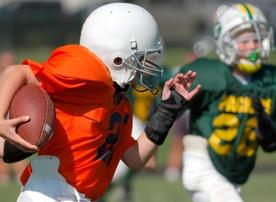 Youth football players must learn a lot of rules.

Youth football coaches must teach what is legal

The football rules book is big enough to make any young player’s head spin. But on the youth football level, coaches have to make sure players understand the rules.

Some basic rules get overlooked, so when you’re coaching youth football, make sure your team’s youngsters know about the following 10 football rules:

(Instruct the best coaching techniques through PSTV football training plans. Here's a great instructional video teaching the shotgun exchange for the quarterback and the center.)

Downed ball carrier. On the youth level, a ball carrier is considered down if he accidentally touches the ground with his knee by slipping or falling without being touched by a defensive player.

No re-entry to the field. Unless he is blocked or pushed out of bounds by the defensive team, an offensive player who goes out of bounds cannot step back onto the field and rejoin the action.

Live ball on kickoffs. After the football travels 10 yards on a kickoff, either team is allowed to secure and advance it.

Running or roughing the punter/kicker. Most people know roughing the kicker brings about a 15-yard penalty and an automatic first down for the kicking team. But there is another similar rule with a much different penalty. If the defensive player runs into the kicker, it draws a 5-yard penalty and no automatic first down. Incidental contact is not a penalty.

Ineligible receiver downfield. Your team’s offensive linemen need to know this rule. An offensive player who is not an eligible player cannot go more than five yards downfield from the line of scrimmage during a pass.

Backward pass. A backward pass is the same as a lateral, so it’s considered a fumble if not caught by an offensive player. Either team can recover the football.

Pass interference. This penalty can be signaled against either the offense or defense. It occurs when a player interferes with an opposing’s ability to catch a pass. Pass interference may include tripping, pushing, pulling or cutting in front of the opposing player.