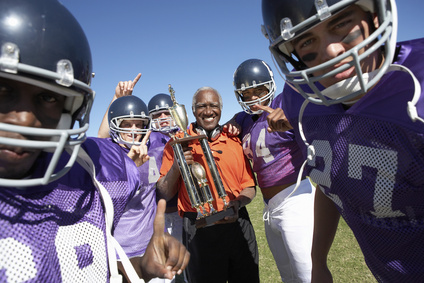 Sometimes asking for advice can be the best play call by a youth football coach.

Rather than charging head-first into coaching, prospective youth football coaches should use all the tools around them to make sure they're teaching the game correctly, including safe tackling technique.

And those resources, usually high school football coaches, are often more than willing to lend a helping hand.

“We always have a spring clinic for our youth football coaches and dads,” Lake Travis (Texas) High School football coach Hank Carter said. “We get the dads together and remember that this may be the first experience kids have with a football, and we want it to be a positive one.”

In the camp, Carter — the coach of a perennial Texas state champion — and his assistants go through specific football drills for each position and have stations set up to explain what each one will accomplish.

"Each coach takes a job and does his part to make sure that everyone knows what is going on," Carter said. "We really get a lot positive feedback. A lot of the parents come back the next year and tell us how the camp and training helped them and their kid understand, and, more importantly, enjoy football."

(Instruct the best coaching techniques through Play SportsTV training plans. The Strip Ball/Tackling Drill will get you started on football defense.)

With a football team's schedule, practices often outnumber games exponentially, so it's important for youth coaches and players to develop a routine of skills and drills.

"Another thing we do in the camp is get coaches used to setting a normalcy to the day, but keeping it fun," Carter said. "For example, working on basic footwork and stance is important, but after even 10 minutes of that, you should move on to a drill that grabs the kids’ attention again.”

If there isn't a local camp or training session like the one offered in Lake Travis, youth coaches should make it a priority to talk to high school football coaches in their area.

"Coaches are going to be willing to help them out," Carter said. "Football coaches are football people, and they love to see kids in the sport. If you don't have a camp or formal training, call up your local high school coach and I'm sure he'd help you out."

In addition to talking to just with the high school coaches, youth football coaches can often bring their team to watch a high school practice as an example of the proper way for practicing.

"It might be mundane to kids who are just working on the basics. But, when they go watch older kids, kids they watch play on a Friday night doing the same drills, it's kind of eye-opening for them," Carter said. "Reiterating the basics through examples will help kids see how far they can go."

When kids who have an example to look up to and learn the right drills and skills early in their football careers, high school coaches notice in the future.

"You can tell when a kid has the right attitude and has been around the game," Carter said. "This is easy to achieve. The more the parent or coach takes time to understand and help the kid, the better they'll be in the future."