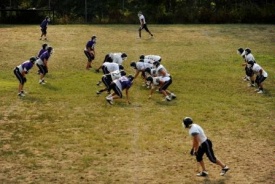 Blake Sorem, who coaches youth football in Edina, Minn., has watched the spread offense take hold at the high school and college levels.

The Edina High School football team that is fed by the youth program also runs the spread, so Sorem is excited to be teaching his squad the offense. He added one of the bigger advantages of the spread is - as the name implies - getting the defenders spread out.

“You can create gaps and openings and run it up the middle,” Sorem said. “The smaller schools (in the large-school classification) in high school and in college can use the spread and it can allow teams to keep up.”

(Instruct the best coaching techniques through PlaySportsTV football training plans. The Bull Frog drill teaches explosiveness out of a stance.)

A youth football coach will learn how the spread can create mismatches for the defense.

“I like the idea of making people cover guys,” he said. “Get people in flats and create a 6-on-5 in the offense’s favor.”

One of the big challenges, Sorem said, is getting the ball from the center to the quarterback, as is having a quarterback who can throw the ball.

“Executing the snap can be tough,” he said. “If you have receivers out there and you don’t throw it, people won’t cover them. I’ve always believed in running the ball and playing good defense. If you can’t run, you get into a shootout. For us, it’s about keeping the 'D' honest.”

Sorem said the best athlete in running a spread offense has to be the quarterback.

“In the spread, the quarterback is basically a tailback and the back is more of a fullback,” he said. “You’re looking for an athlete and guys who can block. We use a lot of zone blocking and move people around rather than dominate at the line.”

Sorem often isn’t the first coach to introduce his players to the formation. “What we do know is a lot of kids are going to the high school camps and are getting some of it,” he said. “We’re putting in four plays: a straight quarterback lead, a straight option, power to the fullback and a screen.”

Sorem didn’t favor using the spread at one point, but eventually saw the advantages increasing. Now he’s teaching how to play football in a whole new way.

“I saw Edina have success with it at the high school level,” he said. “I’ve watched good teams run it. It doesn’t mean you have to throw the football, but you have to throw a little. All you need is athletes who can create space once they get the ball.”