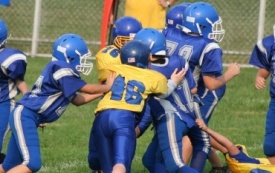 And that’s how they know if they’ve made a difference.

It’s not always easy to determine if a practice has been successful. But, according to Gerry Rardin, the highly accomplished football coach at Walsh Jesuit High School near Cleveland, the looks of his players after the final whistle always gives it away.

While coaching football with one of the most successful high school programs in Ohio, Rardin delves far beyond the basics with his players in practice. But he stresses that football fundamentals must be the only priority for youth coaches, particularly at the earliest stages of development.

He understands that even the youngest kids want to learn what they’ve seen the high school players do in person or what the college or professional players do on television. But, he adds, anything more complicated than basic football skills should not be attempted until the fundamentals have been mastered.

Rardin, a former NFL High School Coach of the Year, explains that youth football players can’t progress until they learn the fundamentals. And no matter how tempting it is for a youth coach to appease his players by practicing fun plays or trick plays, they must continue working on football fundamentals.

“In coaching youth football, the most important thing is to not overcomplicate things,” Rardin says. “The simpler, the better. Teaching the ideal blocking and tackling techniques is good. A lot of coaches at the youth levels make things too complicated, which doesn’t enable a kid to get better.”

What enables a youth football player to get better is a daily understanding of what he needs to work on. That allows him to concentrate on a specific task. Rardin believes that is critical to success.

“It’s important to get kids to focus on one thing to get better,” he says. “The kids should say something like, ‘So today I’m going to get better at coming out of my stance.’ Ask the kids to take a quick minute and start thinking about what they need to work on.”

Another issue confronting youth football coaches is the desire kids have of playing their dream positions, most often quarterback, running back or wide receiver. Not every child is suited for the so-called glamour positions, but Rardin strongly believes that coaches must be careful not to kill their enthusiasm.

Rardin recommends building a positive, trusting relationship with kids while easing them into more appropriate spots on the field and still maintaining their hopes of eventually playing the position they covet.

“We have a lot of inexperienced kids who come out for the team here,” Rardin says. “The way we do it is that we tell a kid that we’re here to help you be the best you can be and we let them try any position they want. But we also tell you that we’re going to try to get you onto the field as soon as we can.

“So we’ll say, ‘John, we’re not sure when we can get you onto the field at quarterback, but we’re pretty sure we can get you onto the field as a tight end.’ You have to be up-front with the kids. You don’t know if a kid at that age is going to be 5-foot-5 or 6-foot-5. You don’t want to crush his dreams of becoming a quarterback, but you have to let him know that you recommend that he play somewhere else.”

How do you know if a youth football player accepts that idea? You can see by the smile on his face as he leaves the field that day.