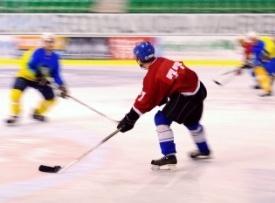 Youth hockey players get quicker as drills get more challenging

The ”welcome to ice hockey” moment for many youth hockey players occurs when they start playing games. The speed of the game can be faster than anticipated and often results in an adjustment period for the youngster.

The goal of youth hockey coaches is to get youth players comfortable applying their skills with both efficiency and speed while opponents are trying to take the puck away.

To help youngsters gain confidence at a quick pace, coaches in the Lawrence Flames Ice Hockey Club of Lawrenceville, N.J., recommend running a large part of hockey practices at game speed. This gets players to react instinctively and not over think what they are doing on the ice. A fun example is the skill-building game Sharks and Minnows.

“It’s kind of a progression,” says Will Whittaker, who coaches on the hockey travel club’s pee wee (11- and 12-year-old) level. “ When they’re starting out, just learning how to skate, we have certain drills that we run. And then we progress from there. As they mature (and) as they get better, we make the drills more difficult and more challenging. By doing that, usually speed comes along with that.”

“Focus on skating at the young ages, get these guys skating and focusing on technique,” says Claude Quesnelle, a youth hockey coach on the club’s squirt level (9- and 10-year-olds).

“Get them thinking, ‘Yeah, I guess I am a fast skater.’ So there’s no doubt that their confidence level is high and that they all go out and do it.”

“We’ll have relay races, races for the puck, where we really challenge the kids to give it their all,” Whittaker says. “It brings out the true speed in what their ability is.”

“Cycling is when you have the puck in the offensive zone and you are moving it around usually low into the zone in the corners,” he says. “You’re cycling it around, you’re not just shooting the puck, you’re cycling to open players and trying to create a situation for the best shot on goal. To cycle the puck, you need to do it with some good passing and speed.

“We work on breakouts, when we break the puck out of our defensive zone. That has to be done with precision and speed. Also, a really good forechecker in hockey has to have speed. And we work on that a lot in our forechecking game, where the puck is in our offensive zone, but they have possession of it and they’re trying to break the puck out. We’re trying to force them to cough up the puck. That takes a lot of speed.”

“I have two groups line up in the corners behind the goal line, one group line up in the slot in front of the net,” Quesnelle says. “And the one in front of the net has the puck and that’s where you start off. The drill will be to go toward the goal, go around the goal and do a breakout pass to one of the wingers on the side. The idea of the drill is the guy makes the breakout pass (and) the wingers are starting to fly up the boards. The pass is made to the center zone of the ice – if you draw lines up the ice and break the ice into three lanes – the pass is made from the middle lane to the outside lane.

“It’s a great drill because it has breakout passes, it has neutral zone passes, it has attack triangles, zones, attacks, passing onside – it has everything in there – and you’re trying to get them to game speed.”

Once youth hockey players develop confidence and technique at game speed, opponents can be added to drills. This will help the players to be creative and improvise against the opposition.