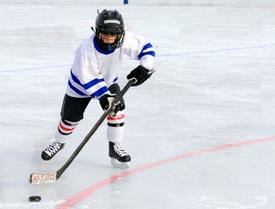 Youth hockey players should learn both skills and rules.

A youth hockey coach doesn’t want to put players on the ice until they have some knowledge of hockey rules. This will foster a safe and strong playing environment.

USA Hockey requests in its rules that coaches do not overemphasis winning, but teach hockey skills and instruct players to play by the rules. Here are 10 important USA Hockey rules to get youngsters learning about the sport:

Holding the stick. It all starts with a player learning how to hold a hockey stick correctly. A player’s use of his hockey stick is limited to playing the puck and not gaining an unfair advantage against an opposing player’s body. The stick can’t be used to impede another player’s progress.

Broken stick. A player with a broken stick must drop it and remain on the ice without a stick until there is a stoppage in play. He may participate in the action once he drops the stick. A minor penalty will be imposed for an infraction of this hockey rule. During a stoppage of play, a forward or defenseman can go the bench to get a replacement stick, but the goaltender must have a replacement stick brought to him.

Different penalties. A minor or bench penalty lasts two minutes, while a major penalty is five minutes. A misconduct penalty lasts 10 minutes long, though, unlike the other penalties, a replacement player is immediately allowed on the ice while it is being served. A match penalty means the player is removed from the game and will draw a suspension. During a penalty, the maximum number of players a team can be down is two. A delayed penalty, served after the completion of other penalties, is used when additional penalties are assessed to a team.

High stick penalty. The carrying of a hockey stick above the normal height of the shoulder is prohibited and subject to a penalty.

Goal crease. The goal crease is a privileged area for goaltenders and players may not charge or check him there. A goaltender, meanwhile, can’t trip, slash or spear another player in the vicinity of the goal.

Illegal checking. Coach safe checking to youngsters. There is no checking from behind an opponent, use of the butt end of the stick or checking with both hands on the stick when no part of the stick on the ice.

Face-off. One player from each team take a face-off. No other player shall be allowed to enter the face-off circle during a face-off.

Getting a kick out of hockey. Kicking the puck shall be permitted in all zones; however, a goal is not allowed if the puck was kicked by an attacking player and enters the goal either directly or after deflecting off any player including the goalkeeper.

Off-sides. Players of an attacking team may not precede the puck into the attacking zone. However, a  player actually propelling and in possession and control of the puck who crosses the line ahead of the puck is not considered off-side. An off-sides infraction results in a face-off.