Get Started Today!
Plans starting at only
$9.95/month
My Home » Hockey » Articles » Turn Your Youth Hockey Goalie Into a Weapon

Turn Your Youth Hockey Goalie Into a Weapon 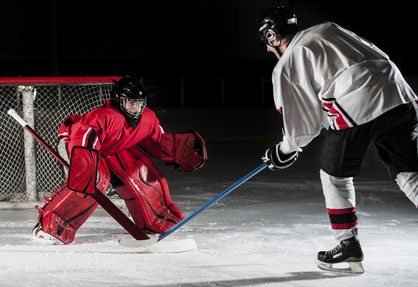 With how the sport has changed, ice hockey goalies are being asked to do more than just stop the puck and prevent goals.

Unlike in the past, goaltenders from the NHL to youth hockey are getting asked to leave the net and play the puck, something that can be disastrous if done incorrectly.

(Prepare your goaltender through PlaySportsTV training plans. The Figure Eight Drill can help he or she become an excellent skater.)

NHL goalie Ilyya Bryzgalov shooting the puck off an opponent and into his own net in the 2012 playoffs is an example of how goalies playing the puck can be an adventure that many coaches don't want to experience.

However, the positives of this skill can outweigh the negatives if a goalie is taught how to play the puck correctly, clearing dump-ins to teammates and possibly even setting up goals on the other end.

"It's a skill that is becoming more and more important," Joe Messina, the director of the Bandits Goalie School in Michigan, said. "Some coaches don't know how to teach it, but if a young kid can start right away, then it eliminates some of those YouTube-worthy bad goals you see on giveaways."

Youth hockey coaches can help their goalies become skilled stickhandlers. The goalies need to recognize both the similarities and differences between their position and other players on the ice.

Just like a forward or defender, a goalie needs to practice basic passing and shooting drills — something coaches can instruct during a regular practice. It's important for goalies, even in their larger pads, to skate and pass with teammates so they can make the play in a game, if needed.

After working with other basic passing and skating skills, coaches need to help goalies with particular drills that set the mindset necessary and instill basic instincts. One drill coaches can work on starts with the coach firing the puck around the boards and making the goalie control the puck behind his net.

This first step is the most important. The goalie needs to work on getting behind the net quickly and just stopping the puck before thinking about the pass. According to Messina, many goalies make the biggest mistake by ignoring this part and not concentrating on controlling the puck before it can go around the boards to the other team.

After making the stop behind the net, the goalie should work on making a nice hard pass to the coach or a designated player. This pass doesn't have to be in the air or a certain speed, it just has to be accurate — the base of all passing mistakes.

"Nice crisp shots and long passes start with aiming right," Messina said. "A hard shot is nothing if it misses its target."

After making the pass, the goalie needs to get back in the net and face a shot, simulating a game situation in which the puck was turned over or lost by the defenseman.

Once a goalie gets the basic drill down, hockey coaches can add challenges, such as an incoming forechecker or making the pass to a moving target.

If a goalie can make the right plays in moving the puck, he becomes a valuable weapon to his team and, most importantly, can avoid silly mistakes.