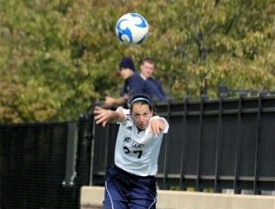 Dead-ball situations offer excellent offensive opportunities for youth soccer players. The defense is in transition. There is the potential for confusion and the goalie is rarely as vulnerable.

All of this begs the question: How can youth soccer players consistently gain an offensive advantage on dead-ball situations, including throw-ins, corner kicks, goal kicks, direct kicks?

"The easiest way to do it is to put the ball into the danger area,’’ says George Nazario, head men’s soccer coach at The College of New Jersey.

He adds overthinking can be the offensive player’s worst enemy when it comes to the dead-ball situation. "There’s no such thing as the perfect play so it depends on how many times you can break down (the defense)," he says. "The distance you can knock the direct kick is different than throwing. But the most dangerous situation is when you can serve the ball with your foot."

Nazario’s peer, Joe Russo, the head coach of the TCNJ women’s squad, says conceptually a lot of coaches have the wrong emphasis. It’s not a matter of a specific soccer drill, but having players in the right positions (at the right angles) on simple practiced plays.

“It’s not an individual technical skill, it’s a tactical equation," says the coach of one of Division III’s elite programs. "This is where the midfielder goes, outside back goes. It’s relative to the type of player you have. It’s not if you are training a U-12 team, these are good drills for restart. We have a short corner we rehearse, a back post and a near-post. We set up and choreograph these. In the walk-through live, we make sure our kids are in the right spots."

There are errors to avoid, so a youth soccer coach should recognize the role of each piece. "A lack of technical ability (is often the biggest problem)," Russo says. "Let’s say on the back post service, the kid mishits it and it doesn’t get in. The (error is that) kids are making their runs too early or too late. We just paint a clear picture so when it happens in a game, a player (understands where they have to be). Every player is different and everybody has a different responsibility."

On the collegiate, international or professional levels, the throw-in should be second nature. Nazario admits that set pieces are worked on "only two percent of the time in practice. We just try and get the best athletes to have a little confidence, whether it’s the throw-in or the free kick."

So how does a youth soccer coach correct this approach? Make it fun for the younger player. "Have a little contest, like dodge ball," Nazario says. "Get in the habit of throwing it down to the ground."

Photo courtesy of The College of New Jersey