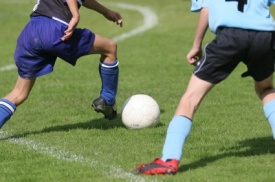 A simple game of keep-away develops confidence for ball skills

An 8 v. 3 or 9 v. 4 game of keep-away hardly seems fair in soccer, but it just may be the best way to teach youth soccer players how to play with consistent possession.

Although the term “kick and run” rolls off the tongue, it’s not so sweet on a soccer pitch, and with beginner and intermediate youth soccer, it’s too often the case.

(For hundreds of youth soccer drills and tips, check out PlaySportsTV's Coaching Youth Soccer series. Use the Ball-in-the-Circle Drill to develop passing and possession).

Jerry Laterza, technical soccer director of the successful Legends Football Club out of Chino Hills, Calif., believes young players need to build confidence with trapping, dribbling and passing before they can play with consistent possession against an opponent’s pressure.

“The key of possession at younger ages is you’ve got to build confidence,” said Laterza, a former 10-year professional soccer player whose Legends FC squad won the 2009 Cal South National Cup Champions title. “A week or two ago, I saw some coaches doing some drills and they were basically U-9 and they were going 4-versus-4 possession. You’re not going to get more possession doing 4-against-4 with U-9. You can play games, like going to goal, 3-against-3 or 2-against-2 or 4-against-4 – that makes sense – but (with) possession it’s actually very difficult. At that age, they don’t know how to create their own space yet.”

Youth soccer players struggle to gain confidence if they continually give the ball away in even-sided drills and games. Laterza recommends coaches use a soccer drill in which the offensive players who are trying to keep possession of the ball outnumber the defensive players. The drill is played in roughly a 40-x-40-yard or 40-x-50-yard grid, and the sides came be different combinations, like 8 v. 3, 10 v. 3, 9 v. 4, etc. The offensive players will develop touch and passing skills against the defensive chasers.

“The grid forces them to think and it’s a reduced, limited space,” Laterza says.

As players develop their soccer skills and get older, Laterza recommends adding limitations to the soccer drill. For example, instead of free touch, the offensive players can use only two or three touches. A coach can add defensive players, but the offense always needs more players to work on possession.

When the soccer coach makes the sides even for practice games, he will see his players controlling the ball with possession.