Get Started Today!
Plans starting at only
$9.95/month
My Home » Soccer » Articles » Avoiding the Swarm in Youth Soccer

Avoiding the Swarm in Youth Soccer 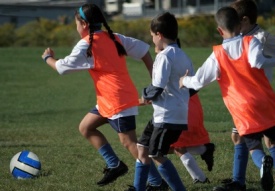 Americans are often encouraged to think big. But in the case of youth soccer players, it’s the little things that mean a lot.

Perhaps not as drastic as those “Incredible Shrinking” movies that have been so popular, but the message from Wayne Huston is almost as dramatic.

To aid in the proper training of beginner soccer player, you have to think small.

(For hundreds of youth soccer drills and tips, check out PlaySportsTV's Coaching Youth Soccer series. Here's the great soccer passing drill Get Out of My House.)

All this minimizing is to help discourage the large pack mentality that seems to plague youth soccer fields across the nation. Coaching soccer to youngsters means getting them to spread out.

“The swarm itself is just a matter of one kid, maybe two, who has the ability to be able to dribble at that age,” says Huston, who earned All-America status as a soccer player at Trenton State College in New Jersey in the 1960s. “They would follow him to try to catch up with him. But if you reduce the numbers – narrow the field by half as much, let them run around, have no ‘offsides’ and just let them go for five minutes …"

“Put the defender on the 5-yard line and tell him, ‘Don’t worry about dribbling the ball. Wait for that guy.’ Rather than following the dribbler all over the field. You have to recognize there are kids (the “dribblers”) that have that kind of dominance.”

A smaller ball also will encourage and enable mastery of soccer skills and drills. Generally, soccer balls are available in sizes 2-5 with size 5 for ages 12 and up and 3 for those under 8 years of age.

Huston also encourages frequent player substitutions, sometimes en masse. “We put a rule in: everybody had to play and we subbed them five at a time every 7-8 minutes,” he says. “We didn’t keep score.”

Once players get used to spreading out, the concept sinks in. Sometimes simpler really is better and never assume anything with kids or adults, Huston says. “Teach the coaches on the (recreation side of the league). They’re dads and moms and maybe they didn’t understand some of the things you could and had to do to get (the youngsters) to develop the ball skills.”

Again, he advises, the concept of breaking the sport down to the smallest denominators may pay big dividends for a youth soccer program.

“Encourage very, very basic simple stuff,” Huston says. “Use touch-touch when a kid is running. For every time he runs (strides), he touches the ball. There are a lot of in-place things you can do, too. The most important thing is they always have a ball at their feet and they are not standing in the middle of the field for four, five minutes before a ball lands at their feet.”