My Home » Soccer » Articles » Youth Soccer: Get a Kick Out of Corners

Youth Soccer: Get a Kick Out of Corners 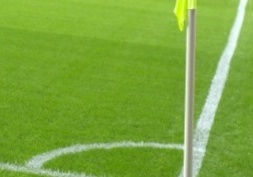 A youth soccer team should be aggressive on corner kicks.

A defense won’t necessarily find corner kicks dangerous on the introductory levels of youth soccer, but it’s important for coaches to stress them. As players get older, and their ability to kick the ball across the goal area improves, corner kicks will become excellent scoring opportunities.

A corner kick is given to the attacking team when a defending player last touches the ball before it goes over the end line. The offense then gets a free kick from the closest corner arc.

A defense typically has more players near the goal on a corner kick, but the offense has the knowledge of what it is trying to do with the ball.

(Instruct the best coaching techniques through PlaySportsTV training plans. This great soccer instructional video teaches finishing from a cross on the ground.)

Messiah College head soccer coach Brad McCarty recommends taking some of the defensive advantage away by being aggressive offensively. McCarty has helped the Falcons win seven of their eight NCAA Division III championships as an assistant coach and head coach.

“The biggest weapon is if you can develop players who are willing to be aggressive and maneuver their feet to the ball and head it in the air,” McCarty says. “Most times, that ball just drops for the younger kids.

Their ability to reach the ball, be aggressive and be willing to head the ball correctly, rather than being afraid of the ball bouncing off their head or hitting them in the face, is important. Aggressive play, where someone is confident in the air, that goes a long way.”

A defender generally must stand at least 10 yards back from the offensive player taking the corner kick, but the distance can be shorter for younger kids who play on smaller fields. Soccer coaches should instruct kids not to just kick the ball and hope for the best, they should have a target area.

A team wants to get the ball in front of the goal, usually from the penalty spot on in, especially around the 6-yard box. Supporting players can help  youth soccer players who can’t get the ball across the goal area. One option is to have the teammate come up along the sideline and take a pass they can kick toward the goal.

Another option is to have the supporting player inside the penalty box near the end line. “If I’m on the left side of the field and I’m taking a right-footed corner, I have the ball and the player is a couple yards inside the end line,” McCarty says. “I pass it to that person and then I run around that individual. And they have a choice. They can either dribble to goal, they can take a touch and cross it if the defender comes, or they can play me and as I run around ‘em and I get a little bit closer (he gives a pass) and maybe I can have the opportunity to get it in the box. The other option is have a player check to the ball. Start at the near post, you can check to the ball and then you can play the ball on the ground to that person. That person can lay it off. And then you have a ball rolling back to you, and that sometimes is easier for a younger player, ages 8 to 12, to hit a ball in the air into the box.”

As youth soccer players develop the ability to cross corner kicks in the air, it opens up many more scoring opportunities. Players will begin to curl the ball toward the goal.

“Technical ability is their ability to curl the ball into the box, so that’s critical,” McCarty says. “That’s a technical thing rather than a tactical thing. And for that, that’s repetition and learning how to come across the ball at the right angles so you can spin it into the box. I think finishing head balls is important, to be able to have the ball on the end line and teach your players to be aggressive in the air and head through the ball in the direction that it comes. I mean, that’s critical. You get your head and shoulders squared up and you head it back in the direction that it comes.

Coaches often overlook practicing corner kicks during soccer training. As players get older, McCarty recommends youth soccer coaches learn to recognize who is best at different skills. He can even place a taller player in front of the soccer goalie to obstruct his view.

Whatever you do, have a plan for corner kicks.