Get Started Today!
Plans starting at only
$9.95/month
My Home » Soccer » Articles » Coaching the 10 Most Important Youth Soccer Rules 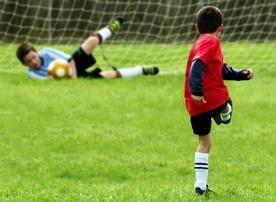 On penalty kicks, the soccer goalie faces a disadvantage.

Soccer coaches must prepare the beginners

The introductory levels of youth soccer are often about kicking the ball, having fun and, well, watching the swarm of players surrounding the ball.

(Learn more coaching techniques through PlaySportsTV soccer training plans. The Soda Fountain Drill will get your soccer players learning to dribble and have fun.)

Center Kick-off: The center of the field is where the action starts, whether at the beginning of quarters/halves or after a goal. Only two offensive players can be inside the arc surrounding the center of the field. At the referee’s command, one of the players will touch the soccer ball forward for the other player to touch it in any direction. Any player can converge on the ball after the first touch.

Hand Ball: You’ve probably said it or heard somebody say, “Only the goalie can use his hands.” Well, it’s true, so make sure your field players keep their hands away from the ball and aren’t afraid of it coming at them in the air. The soccer goalie can only touch the ball with his hands inside his team’s 18-yard box.

Throw-in: OK, field players are allowed to use their hands on this play, but the soccer ball is coming from outside the field of play. Awarded when the ball crosses completely over the side line, the team that did not touch the ball last is allowed to throw it back into play. Coaching the throw-in technique is just as important as explaining the rule. A player must use both hands to throw the ball from behind and over his head, and with both feet on the ground. He takes the throw-in from the spot where the ball went out of play.

Goal Kick: The soccer defense restarts play with a free kick from its 6-yard line. It is awarded to the defensive team when the offensive team last touches the ball before it goes out of bounds over the end line, or goal line (it doesn’t apply if a goal was scored).

Corner Kick: The offense restarts play with this free kick from one of the corners of the field. It is awarded to the offensive team when the defensive team last touches the ball before it goes out of bounds over the end line, or goal line (it doesn’t apply if a goal was scored). The ball is placed at the nearest corner.

Penalty Kick:  Also called a “PK”, this free shot against the soccer goalie is awarded to an offensive player when the defense commits a foul within its 18-yard box, including for a hand ball, pushing or tripping. All other players must stand outside the penalty box until the free kick is taken on goal. The goalie should position himself in the center of the goal mouth, and he must stand still until the ball is struck.

Offside: Keep it simple: Just make sure your players do not go behind the other team’s defenders unless they are dribbling the ball or following the dribbler. When the ball is on the opponent’s side of the field, the offensive players must be in front of or even with the second-to-last defender (the goalie is the last defender) when the ball is passed behind this second-to-last defender. Eventually, defenses will try to draw opponents offside with strategic movement, but the youngsters won’t face a trap at the introductory level.

Dangerous Play: Although this soccer rule doesn’t often apply to the introductory level, it’s important to explain for player safety. It occurs when the referee determines a player did something that is unsafe to himself or another player. Even trying to play a ball from the ground while being around another player is a dangerous play.

Unsportsmanlike Conduct: Hopefully, none of your youth soccer players will be collecting a yellow card or red card for poor behavior. Promote the importance of sportsmanship and explain how a referee does not allow direct physical or vocal abuse to him or any players,  or intentional fouls.

Information from Soccerhelp.com contributed to this article.