Get Started Today!
Plans starting at only
$9.95/month
My Home » Tennis » Articles » Beginner Tennis: Build Confidence in the Backhand 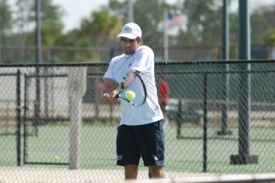 Beginners need to develop confidence in the tennis backhand

When it comes to the tennis backhand, beginners are often reluctant to use the shot, preferring to run around the ball to hit a forehand with which they are more comfortable. But learning how to hit a backhand is essential to success in tennis and beginning players must develop confidence in their backhand.

Confidence is gained through repetition, but there are other easy ways the beginner tennis player can improve his backhand.

“To me, I have always thought that you should teach young kids, even adults, a two-handed backhand,” says J. Webb Horton, the highly successful head men’s tennis coach at Florida Gulf Coast University in Fort Myers, Fla. “It’s more stable and I think it provides kids an opportunity to be more successful unless they have great body strength.”

One of the aspects that Horton learned about the backhand is that the numbers don’t lie. Beginner tennis players go to their forehand more often than their backhand by an overwhelming shot ratio. So it would stand to reason that their backhand would be considerably weaker than the other aspects of their game.

“One of things you can do is set up your targets,” Horton says. “For beginners, deep and down the middle. Set up cones and hit between the cones.”

More repetition? Absolutely, particularly for the beginner tennis player. “When students start out, only hit backhands,” Horton says. “It may be uncomfortable, but you have to set your two feet. With the two-handed (backhand) the left hand does the work.”

Breaking it down further, the tennis coach should understand the how-to emphasis. “The left hand pushes and the right hand stabilizes the racket,” Horton says. “Make sure there’s a follow-through."

Respect Your Opponent
Horton emphasizes the right mentality on tennis defense, be it on the backhand or even the forehand. “Players sometimes don’t give enough respect to opponents,” he says. “If a guy hit’s a good shot, the best you can do is block it back. Over the course of time, you might be able to do more with it. But you want to build up your ability to those situations.”

Build Your Core
Horton says work in the weight room has never been more critical for tennis training. Building up one’s inner core helps in both strength and endurance. “It’s a matter of strength and not understanding that when you’re a beginning tennis player, if you play someone with more weapons, you’re gonna get beat. Tennis is a hard sport to close the gap,” Horton says.