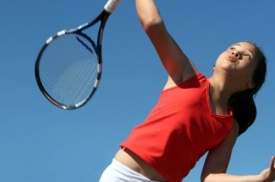 It all looks so easy. Throw the little ball over your head, swat it over the net with it landing in that little box on your opponent’s side.

Children often think of the tennis serve in simple terms, not unlike having a baseball catch with yourself in your backyard. Where it lands, no one knows, and it’s not too relevant.

Only as we develop into better players and begin to understand the tennis basics does it become clear how important the serve is to one’s overall performance on the court. It's important to know practice tips for improving serves.

“Developing the serve should be one of the top two priorities in any junior's game as well as a teenager’s or young pro,” says Jai DiLouie, USTA national coach at the National Training Center in Boca Raton, Fla.

Kirk Anderson, USTA director of recreational coaches and programs, agrees. “The serve is always the first test,” he says. “It’s easy to say it is the most important shot because it starts the game. It’s important to match the direction with the speed.”

Anderson says a key to developing a good serve is to keep things simple. “There are a lot of moving parts to the serve,” he says. “Consistent contact goes along with a consistent toss - the reach. Build from there. I like to keep things simple. With extra motion, you have more timing problems, more things to coordinate. I always like to have young players take time to get in control. They don’t have to rush and they can visualize the ball going into the court.”

That doesn’t change as players improve their tennis serve. But there are other nuances that can help. “By learning and developing spin,” DiLouie says. “In the women’s game, it is a stroke that is deficient due to lack of basic throwing technique and a combination of strength factors in a very rudimentary sense. In the men’s game, the serve is a much greater weapon due to strength factors and better technique.”

Fortunately there are plenty of simple tennis drills for improving the serve. “I like to get a good solid throwing motion down and the best object that gives you an overhand motion is a Nerf football,” Anderson says. “With that, you need everything to get good spiral down. (Another way) to keep things simple is I won’t let people move their feet. Just to get the arm rhythm, have them serve without moving so they won’t shift their feet forward and back.