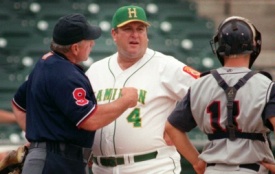 Having been around baseball as a coach and manager for more than three decades, Rick Freeman has seen firsthand how advances in medicine have impacted the sport, most prominently baseball pitchers.

“I think in the early days, there wasn’t a whole lot of thinking about pitch counts,” says Freeman, referring to the early-to-mid 1970s. “It was just watching how guys performed inning to inning. Did they get tired, things like that.”

(Here's a great wall drill from the PlaySportsTV training library to develop a pitcher's mechanics.)

Freeman, a veteran coach of many levels, is a student of the game as much a teacher of the game and has closely followed the research that the world renowned orthopaedic surgeon Dr. James Andrews and Dr. Glenn S. Fleisig have done over the last two decades.

From 2005-2006, Dr. Fleisig, an adjunct professor in the Department of Biomedical Engineering at the University of Alabama-Birmingham and the Pitching Safety Consultant for Little League Baseball and Softball, conducted a two-year pilot program across the state of Alabama on how pitching affected a player’s arm.

Using Fleisig’s findings that a baseball pitcher who worked past the point of arm fatigue is 36 more times likely to develop arm problems serious enough that would require arm surgery, Little League Baseball instituted a pitching count regulating a youth baseball pitcher to no more than 85 pitches in an outing prior to the 2007 season.

If a pitcher hits the 85-pitch mark during an at-bat, he or she is allowed to finish out that at-bat, but must be pulled from the mound following an out or a ball being put in play.

Per the rules, any pitcher who reaches the 60-pitch plateau must sit out a full three calendar days before he is permitted to pitch again.

In a suspended game, a pitcher who surpasses 40 pitches must sit out one full calendar day. If a pitcher has thrown 21 to 39 pitches, he can return when the game is resumed – presumably the following day – and pick up where the pitch count was left off. Anything below 20 pitches and the pitch count restarts.

In today’s society, where youth baseball players will play on two, three, sometimes four teams, and in some parts of the country all year round, Freeman feels the baseball pitch count is necessary.

“You play a lot of games, so there’s more risk for injuries,” says Freeman, a longtime college coach and manager of the ultra-successful Hamilton (N.J.) Post 31 American Legion baseball team. “I understand the pressures that are out there for parents and players; they feel they have to play more to be seen. It’s a tough dynamic. Where do you draw the line. It’s a dilemma that’s in today’s society.”

One of Dr. Fleisig’s recommendations outlined in his research titled “Factors Related to Arm Pain in Youth Baseball Pitchers” suggests that on top of the pitch count, a youth baseball pitcher not throw more than 600 pitches in a season.

Fleisig also strongly recommends that until a pitcher is at least 14 years old and his arm muscles are fully developed, he should not throw a breaking pitch of any kind.

“(U)ntil you are a certain age, get by with fastballs and change-ups,” Freeman says. “Breaking balls are too tough on the arm and nobody can throw it correctly. There’s a certain way to throw it, but that’s beside the point. I think pitch counts are correct at that level and it’s important for the pitchers and the players to realize there’s only so much ammunition in the arm and you don’t want it to run out too early. You want it to last as long as you can.”

Photo courtesy of The Times of Trenton, NJ