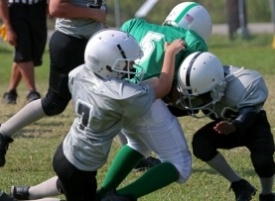 Knowing how to tackle isn’t only a must for defensive players. Offensive players and special teams players also have to be good tacklers because many times they need to stop the other team.

“So the more repetition with it, the more drilling, the more confident the young football player becomes,” says Chuck Kyle, the longtime head football coach at St. Ignatius School in Cleveland. Entering the 2013 season, he had guided his program to 11 Ohio state and three national titles. He also coached the first U.S. junior national football team in 2009.

It’s important to coach youth football players to be aggressive tacklers. For front-on tackling, players should step into the tackle and hit with their shoulder pads  – not their helmets. Tacklers should keep their feet moving to continue their momentum, and wrap both arms around a ball carrier while grabbing his jersey.

“Vision is very important,” Kyle adds. “To help keep the tackler’s head up, he has to look at the belt buckle area of the ball carrier by focusing on that area. That keeps his head up in the proper position. If he lowers his head to make contact, that’s where there could be an opportunity for an injury. But if keeps his head up all the way and looks at the belt buckle and just at that last second slides it in front of the ball carrier – not behind him, but in front – and (by) punching his arms around the ball carrier – that secures the upper body on the tackle.

“The lower body, what’s kind of important is to use the phrase ‘same leg, same shoulder’ because as he hits him with the left shoulder, the left leg should be driving in to the ball carrier. That gives the tackler more force.”

Kyle recommends players practice with plenty of repetitions against a tackling sled. A player needs to stand only two or three steps away from the sled because that will mean he needs good technique, and not just momentum, to move it along. “Roll the hips and punch the arms through, driving the same leg, same shoulder into the sled and keep driving your feet afterward,” Kyle says.

Players also can practice angle tackling at full speed, where a tackle tracks down the ball carrier and drives his shoulder pad up and through the ball carrier’s side while wrapping up the chest with his front arm. In this non-contact football drill, however, the ball carrier lines up 10 yards away from the defender and sprints as fast as he can to one side. The tackler focuses in on the ball carrier’s hips, runs after him in good pursuit and throws his body a yard in front so there’s no contact. “What we’re doing there is trying to get the proper pursuit angles,” Kyle says.

Kyle says to stress to players that tackling is a group effort and not just a solo act. The first tackler usually gets the clean hit, but, Kyle reminds, “most fumbles are caused by the second tackler getting to the ball carrier.”