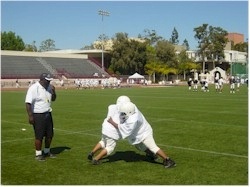 Career responsibilities kept three-time Super Bowl champion Riki Ellison from remaining as head coach of the famed T.C. Williams High School football program, which was the subject of the movie “Remember the Titans.”

Ellison, however, has maintained his commitment to helping youth football players, which he has done for the last three years by running the Youth Impact Program at his alma mater, the University of Southern California, and Tulane University.

His time at the Alexandria, Va., high school reinforced in Ellison the understanding that there is more to coaching young players than showing them how to play football. The glory days were long gone at T.C. Williams when Ellison took over a team that went winless in the first of his two seasons there.

“It took compassion for the community to care more about kids (for more) than the three or four years they put on the pads and play,” Ellison told a group of coaches and administrators at an NFL Youth Football Summit.

(You can coach the football fundamentals necessary to play quarterback through PlaySportsTV's football training plan How to Play Quarterback. The Full Sprint to Pass is one of over 40 football drills.)

Ellison, a former member of the legendary San Francisco 49ers teams of the 1980s, told the coaches that he learned to compete through football, and carried that drive into the business world.

“It is so important what you do for hundreds of thousands of kids through youth football,” he said. “You have a big impact on the future of the country. We need young men who stand up to a challenge.”

Although he does not go head-to-head with those football coaches anymore from an opposite sideline, Ellison is doing his best to try to have the same type of impact on football players.

Ellison, who is the founder of the Washington, D.C., non-profit organization Missile Defense Advocacy Alliance, spends time away from his job each summer trying to reach disadvantaged youngsters through football.

With the help of the NFL Youth Fund, Ellison brings 200 at-risk boys, ages 9-12, to the USC campus for the month of July.

“We get kids from South Central L.A. off the streets for the month and house them at USC,” Ellison said. “At that age, you can turn and change kids.”

The boys are divided into groups of 25 and led by a combination of elementary school teachers, football coaches, USC students and – with approval from the National Collegiate Athletic Association – a USC football player.

An informal setting features the teaching of math and language skills in a curriculum based on NFL statistics. There also are sessions on issues such as anger management, conflict resolution, sexuality and nutrition.

With a group of youngsters who live mostly below the poverty level, the cafeteria is all-you-can-eat. Football sessions are featured in the afternoons, and that’s when players devour Ellison’s football tips.

“It’s amazing the transition of what they do from the first week to the end of the month,” Ellison said.

Assistance from Tulane and the New Orleans Saints allowed for the program to be duplicated in New Orleans for the first time in 2008. Camp attendance was free to all participants.

Ellison said he understands youngsters need to be pointed in the right direction at times. He shared some childhood memories with the group at the NFL Youth Football Summit.

When he was 8, Ellison moved from New Zealand to Los Angeles after his parents were divorced. After sticking out from the crowd in Los Angeles because of his accent, Ellison stood out again, this time, he said, as a “hippy” when he moved to rural Arizona with “just cowboys, Indians, 12 kids and a one-room schoolhouse.”

A move back to Los Angeles didn’t work out too well when Ellison returned to the city with cowboy boots and hat. “I struggled trying to find an identity,” he said.

Ellison eventually found it, in Tucson, Ariz., with the help of football. At Amphi High School, Ellison won a state title playing for coach Vern Friedli, who holds the state record for most wins at one school.

High school success opened the door to a college football career at USC and, eventually, with the world champion 49ers, before he finished his career with the Los Angeles Raiders. The all-star linebacker won a Rose Bowl and a national championship while playing for the Trojans.

While at USC, Ellison became interested in missile defense. He received his degree in international relations and also concentrated on strategic defense. Ellison studied under Dr. Bill Van Cleave, a USC professor who had been part of the SALT (Strategic Arms Limitation Treaties) talks and an advisor to President Ronald Reagan.

Riki Ellison learned to make a difference in life, and he’s doing just that. He remains a coach whom youth football players look up to today.