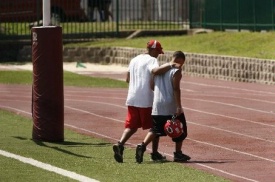 Every player on a youth football team should feel he is an important part of the team’s success, even though they might not share the same abilities and talents.

“A coach has to feel his way around that situation,” Jacques says. “But every kid has to get some positive feedback. If he’s not the best player physically, maybe he can be the kid who leads calisthenics or the kid who gets a little head start on a relay race and wins that. You want him to go home at the end of the day and tell his Dad, ‘Hey, Dad, I was the guy that led calisthenics today!’  You have to be positive.”

Jacques believes the primary function of the youth football coach is to teach football fundamentals in an enjoyable way.

(A great way to coach the football fundamentals necessary to play quarterback is through PlaySportsTV's football training plan How to Play Quarterback. Here's one of over 40 drills: the Pitch technique.)

It’s all about blocking, tackling, catching and throwing. But players won’t learn these football fundamentals if they’re not having fun on the field.  Most players' minds are prone to wandering through boring and repetitive drills.

“What you want to do is make it a competitive situation,” Jacques says. “Instead of running gassers, do a relay race.  Bring it down to the level that will allow you to get your work done with the kids not even knowing it.

Jacques also stresses that even if all your players learn the basics, they are not all going to enjoy performing those specific tasks equally. He believes that coaches must be sensitive to the feelings of all his players.

In other words, everybody will learn how to tackle and how to be tackled safely, but while some younger kids will love the contact that is a necessity in football, others will shy away from it. That doesn’t mean they are doomed to play only non-contact sports. It just means they must be given time and encouragement.

“Some kids are going to love tackling and getting tackled and some kids are not,” Jacques says. “Some kids have to work up to wanting to hit somebody and wanting to get hit. But those are life lessons. In life, when you get knocked down, you have to get up. And that’s what they have to learn.”

The bottom line is that every youth football player must believe he is contributing to the team effort.

“You want every player to understand his role and look forward to every day,” he says.  “As long as he feels like he’s contributing, that’s the most important thing.”