Get Started Today!
Plans starting at only
$9.95/month
My Home » Boys' Lacrosse » Articles » Lacrosse Tips for Winning the Face-off

Lacrosse Tips for Winning the Face-off 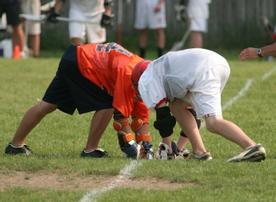 Make it a group effort as your lacrosse team gains possession

Brooks Matthews, who coaches the Gilman School (Baltimore) boys’ lacrosse program that has been ranked No. 1 nationally, says youth lacrosse coaches must stress teamwork when they teach face-offs, which are contested at midfield at the start of every quarter and after every goal.

Strong face-off players have to be competitive and willing to grind out the one-on-one face-offs with winning techniques.

Not all face-offs are won by face-off players, however. Often the ball comes out behind him, so the wing men, like the face-off player, need to be aggressive and quick to secure it.

Matthews recommends that teams use a balanced alignment between the face-off player and his wingmen. “You don’t want to have three guys going for the same ball, you want to have good spacing, like you want to have spacing in almost anything,” he says.

“Once the ground ball is picked up, they can move it quickly. Or if the other team gets it, they can understand how to not give in. … You can hound a guy who gets a ground ball.”

To practice face-offs, Matthews recommends using a step-by-step process. A player will learn a technique, go through it with repetition and add more steps, while also learning a counter move for when he doesn’t get the ball.

For a warm-up drill, a face-off player can practice “topping” the ball, where for about 30 seconds he takes the head of his stick, reaches over the ball and touches the ground on both sides of the ball as fast as he can.

One of Matthews’s favorite lacrosse drills develops lower-body strength. Instead of starting in the face-off position, pit the face-off players back-to-back, almost butt-to-butt. Place the ball on the ground between them. When the coach blows his whistle, the players try to push each other back and off the spot. “You can’t pick up the ball until the ball’s in front of you,” Matthews says.

Matthews also matches two players in the face-off position without a ball. At his whistle, the players battle as if there is a ball and then Matthews rolls it in and the players must scoop up the ground ball.

“You kind of build up to things,” Matthews says. “I think that that’s important, that you sort of break down the skill into parts and you drill those parts and then you add things in so you’re drilling the whole.”