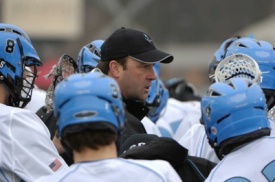 Dave Pietramala sees himself as more than just a lacrosse head coach.

“My first philosophy is that my job is to teach life skills,” said the head coach for Johns Hopkins University men’s lacrosse.

“I think that is first and foremost as a coach. We want to help them develop their life skills so that they can be not only successful while they are here academically, athletically and socially, but so when they go out into the work force they can be successful and contributing members of the work force and to their families. Everything we do is not just about winning at lacrosse; it’s about winning at life, too.’’

And Pietramala has certainly done a lot of winning, guiding the Blue Jays to an 85-19 record with seven trips to the NCAA Tournament, five appearances in the Final Four, the 2005 and 2007 national championships and one other appearance in the NCAA Championship Game (2003).

“The technological advancements have made the picking up of the game easier,” he said. “It’s made it safer. It certainly has afforded people to do things. … When (Princeton University head coach) Bill Tierney and I played, you couldn’t imagine doing (the current skills) ... The advent of the offset heads and all these stuff the equipment companies are doing have had a direct impact on the things these athletes are capable of achieving.”

Pietramala credits the lacrosse equipment companies for their grass roots programs that include advertising and sponsorships which are “reaching kids at a far greater rate than ever before.”

“The helmets are lighter; they are safer,” he said.  “All of the equipment is so much lighter. It is so much more technologically advanced. There is more research put into the development of the stick. There is competition between these companies, so they are always trying to be on the cutting edge in trying to find advances or ways to advance performance. Kids are able to perform at a higher level because of the equipment they are playing in now.”

The latest advancements in the sport deal with the shafts of the lacrosse sticks. Titanium alloys are now being used, which makes sticks less prone to breakage. The heads of the sticks now have different shapes, each beneficial to the players’ ball-handling skills and shot velocity. It has reached the point in which the NCAA thinks the offensive players have too much of an advantage. Pietramala said the NCAA is going to widen the lacrosse stick heads, which could lead more to the dislodging of the ball.

With lacrosse being played more and more on synthetic field surfaces, cleats are being developed specifically for lacrosse.

“STX and Nike have a sponsorship in lacrosse, and Nike handles all of our footwear,” Pietramala said. “Their research and design teams have come out and actually spoken with our athletes about how they feel about the shoes they are wearing, to talk about the game and the kinds of cutting they are doing and the kinds of stress they are putting on their feet.

All of the advances are making it easier for lacrosse training and development.