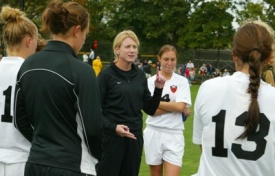 An optimum international-size soccer field measures 75 yards wide. Soccer rules allow it to be as much as 80 yards wide.

“It’s very tough to cover all of that space,” Shackford says. “(Four defenders) is a better starting point. There definitely have been times, such as when we needed a goal (late in a game), when I have (played three defenders). But as a starting point, no.”

That’s not to say there aren’t variations of a four-player defense that could look more like a three-player defense. One, says Shackford, is to have one of the midfielders drop way back and play a “deep holding” midfield. Another variation, one she says she may use against faster teams, is to drop one of her two center backs to provide another line of defense.

Another soccer idea that Shackford and many other coaches refute is that of using a full-time sweeper.

“The further deep you play defenders, the more space attackers have to play while staying onsides,” she says. “By (not playing a sweeper), you don’t get into as many one-on-one battles. By not giving teams so much space, you’re forcing them to be more creative to get the ball behind you.”

Whatever defensive alignment a coach chooses to play, they need to make sure they have the personnel to run it. And when Shackford recruits, she looks for certain qualities in center backs and fullbacks.

Fullbacks play wide to cut off balls from getting into the penalty box. In those players, Shackford says you need athleticism to cover a lot of ground and the ability to defend players one-on-one. Fullbacks also have to be able to defend attackers facing them.

In center backs, the successful soccer coach says you don’t necessarily need the same level of speed and athleticism. But you do need players who can anticipate plays. They also need to be good at playing the soccer ball in the air and with their backs to the goal.

Another important quality in center backs, Shackford says, is communication. Because of their view of the field, they have to help communicate with the other defenders and the dropping midfielders to make sure everyone is in the proper position.

“They’re going to be the ones telling you to hold the line,” says Shackford.

Shackford doesn’t believe in filling practices with soccer drills involving set plays, and says she was brought up believing likewise. Most of her Princeton practices involve working on skills by simulating game situations.

“Soccer is more of a free-flowing environment,” she says, noting the contrast with sports like basketball that have far more stoppages in play. “There are tendencies, but you don’t want to drill kids so much and then have them find something different and not be able to respond."