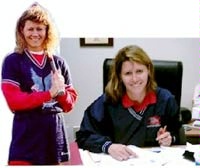 Coach Kelly Jackson is president and lead instructor of the All-American Softball School in West Sacramento, Calif., where she professionally trains coaches and athletes. Jackson is a former All-Pac-10 player who won a gold medal with the 1992 USA Olympic Team and was a 1996 USA Olympic Team finalist.

She is a seven-time ASA All-American and a veteran starter of the three-time national champion Redding Rebels. An ACE certified instructor, Kelly has been instrumental in developing over 250 collegiate athletes playing in every major conference.